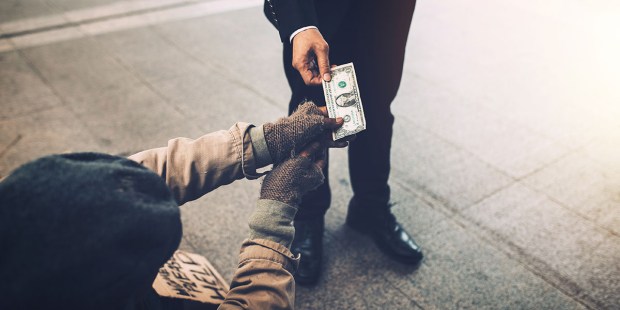 Generosity makes us better people who truly notice those around them and understand their situation.

When you hear the word “alms,” do you think of giving a few cents?

The poverty of others is something that calls to all of us. We don’t want to close our eyes to people who are lacking the bare minimum to get by, as if it were their problem and it doesn’t affect us.

A bad worldwide distribution of wealth

In many cases, being rich or poor is not something people choose. It’s true that there are some poor people who end up that way because they wasted their money, but most are poor for a variety of other reasons, and one big one is that they are caught in an unjust system of wealth distribution. In Latin America, for example, a group of 100 people currently hold the same wealth as the 626 million other people in the region.

So most families and people in situations of poverty are not in that hole not because they want to be. And even if they were responsible for it, they would deserve our support to get out of it anyway. Giving them economic help can give them relief for a meal, a day, a week, a month… It depends on each situation.

We have grown up in an individualistic society that tends to base everything on personal achievements: our goals, our growth, our earnings. But almsgiving, by contrast, brings one of the most wonderful benefits to the soul’s health: it gets us to come out of ourselves.

When we give alms, we don’t just ask a question about the present but about the future. I give with the idea of changing this or that person’s future progress, making it faster, higher, and stronger. These are the three foundations of the Olympic motto: altius, citius, fortius.

And when we think we are changing a person’s future in some way, we reveal the hope that we also will not be lacking our daily bread for tomorrow.

With almsgiving, we learn to be more generous every day. Generosity is learned: when you look in your wallet and you have some coins, count them and ask yourself: might they not be a little more than money?

Because, let’s be honest, do we give only from our surplus? The small change, the coins, the junk … Is this really all I can give? Do I think about what a coffee or a loaf of bread costs? Can I compare it to what I will spend on my phone bill this month, for example?

The attitude of noticing others

Almsgiving activates our neurons and helps us to go out into the world with another attitude. It’s the attitude of “noticing” or of being alert so that I realize what is going on with the people I meet every day. It’s leading a life that is actively disposed to helping others.

When we look someone in the eye, we will learn to read their face and listen to them. Have you ever had a poor person thank you more for having said hello than for the money you gave them? That’s why generosity makes our relationships more human.

Money brings great temptations: greed, the desire for limitless possession, for control … And with generosity, we deactivate the monster. With every alms we give, we reduce the anxieties of our interior dragon.

And being generous makes us grow in solidarity. We have more solidarity and we realize that “the other is my brother,” as Pope Francis said. When I give alms, I realize that “what I have is never just mine.”

Because anyone who has some, a little, or a lot of material goods has to think about how they got to that point. Surely they have to thank other people: those who educated them, their parents, their clients, those who trusted in them, those who helped them acquire a business, get a position in government … We owe something to all of them.

Anyone who says that almsgiving is useless is too pessimistic. Even when we talk about coins, have you ever thought about what would happen if everyone gave something?

But don’t settle for just a little. Listen to your interior, to how much your conscience tells you to give. Give in thanksgiving, give to ask, give to make reparation … Give, as Mother Teresa of Calcutta said, “until it hurts,” when she was asked one day what generosity means.

It helps us grow in solidarity

Finally, it’s very positive to look for ways to give alms that unite us to other people. Look for your reason (a country, a school, a mission …) and involve your friends, your family. Call it crowdfunding if you want. It’s the way of connecting to so many people in the world from a small bit of help. But don’t forget that the essential thing is to give yourself.

Read more:
How to do almsgiving when you don’t have a lot of money