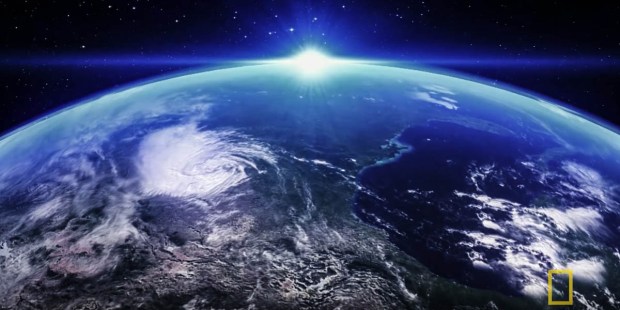 ‘One Strange Rock’ leaves the viewer to ponder what kind of “fine-tuning” went into making the “perfect home” that is Earth.

It doesn’t have to.

“I’m going to tell you about the most incredible place. It might be the weirdest place in the whole universe,” intones series host and actor Will Smith, in the first episode. “You know what? You’re walking on it.”

The series, which launched on March 26, aims to explore what makes Earth the unique home for life that it is. At a time when popular cosmology emphasizes the possibility of other earth-like planets and the likelihood of life on those other worlds, One Strange Rock goes in the opposite direction, stressing what it is that makes Earth exceptional.

The first episode, “Gasp,” reveals how the planet produces enough oxygen for mankind and all over living creatures to survive. To dramatize the overall message, the series is narrated by eight former astronauts who offer insights from their time in space. “There is nothing more natural than breathing yet, as far as we know, this is the only planet where that happens,” says astronaut Chris Hadfield.

What makes breathable oxygen so important, the episode explains, is that it mixes with our food to create the energy needed to power “larger, more complex” organisms such as ourselves. Without it, the biggest life forms you’d get would be pinhead-sized. To underscore the point, we are shown an utterly otherworldly landscape in Ethiopia—a bright yellow, green, and orange mishmash of acid pools that looks like moldy soup. Without breathable air or fresh water, little can exist there—apart from the bacteria that feed off of heavy metals.

The story of Earth’s oxygen also has its origins in Africa. Here the show takes readers on an epic journey that begins in the continent’s deserts, where wind storms send their dust sailing across the Atlantic. That wind-blown sand turns out to be “the perfect fertilizer” for the rainforests, which produce enough oxygen for a population more than 20 times the 7 billion men and women that current inhabit it. And yet, none of it makes it to our lungs, the show explains. Instead, it is consumed by all of the Amazon’s living creatures.

But the Amazon still has a role to play in every breath we take. The trees of the rainforest are like giant straws that take the water they have “sucked up” from the ground and spit it into the air, producing what one scientist on the show calls a “river of air.” This stream of fog—which National Geographic’s cameras really capture—slams into the Andes, condenses into rain, and eventually washes out to the sea.

All that rainwater is rich in nutrients, becoming food for microscopic algae known as diatoms. Although individual diatoms can only be seen with a microscope, they are so plentiful in the ocean that their cumulative presence can be seen from space—diatom blooms turn visible regions of the oceans different colors. And they have a big role to play in how we get our oxygen, producing up to 40 percent of the planet’s total, according to the EPA.

“Take a breath. Now take another. Now think about this: one of those breaths was entirely provided by those little fellows under the sea,” Smith says.

Somehow, despite all the changes in our planets, oxygen levels have remained at a steady 20.9 percent of the atmosphere, the show notes, without explaining why this is so. Instead, we are left with something of a mystery.

“It’s astounding how all the systems down there must work together in order for us to breathe,” concludes former astronaut Mae Jemison. Or as Hadfield puts it in the series introduction: “It’s all just so wonderfully unlikely and yet it’s here.”

Such talk inevitably stirs up religious questions and even the show’s creators, Jane Root and Darren Aronofsky, recognize it. The last stop in the first episode is not some desert or rainforest but a Buddhist monastery during a festival celebrating balance.

But what or who is the source of this balance? The show doesn’t ask the ultimate question, but it doesn’t need to. The entire episode can’t help but suggest it. What’s amazing is that the show’s creators do nothing to snuff it out or shoo it away. To be sure, there is the occasional reference to “luck” but viewers aren’t bombarded with the usual talk about how chance processes explain everything to the exclusion of God. We are left free to ponder whether all this may be evidence of “fine-tuning” by a Creator.

So far, the series seems to be sticking to its overarching theme of earth’s exceptionalism. The second episode, “Storm,” looks at how the “perfect storm” of asteroids early in the history of solar system molded the “perfect home” for us. And, a catastrophic collision with our sister planet gave birth to our moon and left the earth tilting on its axis, creating the seasons and making life possible above and below the equator.

The third episode, “Shield,” highlights how the magnetic field generated by the earth’s molten core and the ozone layer serve as a buffer between the earth and the lethal radiation and ultraviolet rays from the sun. Meanwhile, our water-based weather system disposes of carbon dioxide that would otherwise cause the earth to overheat. Taken together, these features set earth apart from planetary neighbors like Mars and Venus.

Future episodes look at related topics, including the beginning of life, the role death plays in life, and the development of the human brain.

The series does not seem to be theism-friendly by design. It is, after all produced by the same production company, Nutopia, which made the Finding Jesus: Faith. Fact. Forgery series for CNN, which was certainly not sympathetic to the traditions of the Church (see, for example, its treatment of the Shroud of Turin, explained here). While the CNN series was rife with theological missteps One Strange Rock certainly is on the right path.

Perhaps fittingly the 10-part series debuted at the start of Holy Week. Episodes air 10/9c Monday evenings until May 28.