The Swiss Guard uniform was not designed by Michelangelo, contrary to popular myth 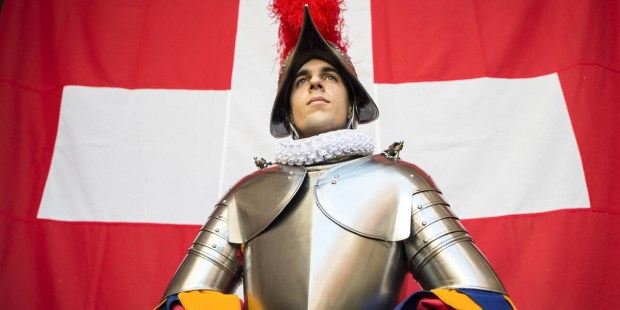 But the men committed to the protection of the pope carry something that may surprise many visitors.

Michelangelo can claim credit for the Pieta, the paintings of the Sistine Chapel ceiling, and a lot of other great works of art, but he was not a costume designer.

The myth that Michelangelo designed the uniforms of the Swiss Guard is based on some confusion about artists, but one that is perpetuated by people like Dan Brown, author of Angels & Demons.

In fact, the uniforms are based on armor common throughout Renaissance Europe. The fact that the current uniforms were commissioned in 1914 kind of makes Swiss cheese out of the Michelangelo myth.

However, uniforms were inspired by frescos of German mercenary knights, as painted by Michelangelo’s contemporary, Raphael blogger Jackie Fuchs points out.

Originally, when 150 Swiss mercenaries arrived in Rome on January 22, 1506, at the behest of Pope Julius II, they wore a uniform made up of a doublet or jacket worn over metal armor, with a sleeveless black cape to protect against rain and cold. To put his own spin on it, Pope Julius ordered that they wear yellow and blue, the colors of his family of origin. His successor, Pope Leo X, did the same thing, adding red to the yellow and blue, so they wore the colors of the Medici family.

Swiss Guard have various types of head gear, including wide-brimmed hats, padded leather caps and metal helmets. All these were trimmed with brightly colored pheasant or heron feathers, Fuchs writes. The metal helmet, however, was soon replaced with the morion — a high-crested open helmet with upward-turning front and back edges.

While the ceremonial dress the Swiss Guard use today are certainly a colorful complement to the sights of Rome, it is the Guard who are watching you, more than the other way around. Many visitors to the Vatican might not know that dark-suited men surrounding the pope are actually members of the Guard, even though they’re not wearing fluffy pantaloons and plumed helmets. Much as the Secret Service is ready to kill or be killed in the event of an attempt on the American president, the Swiss Guard are there to protect the Bishop of Rome at all costs. And they don’t rely on the halberd and pike to do so. Since the May 13, 1981, attempt on the life of Pope John Paul II, guards now carry something a little more lethal: a Sig Sauer P220 pistol.