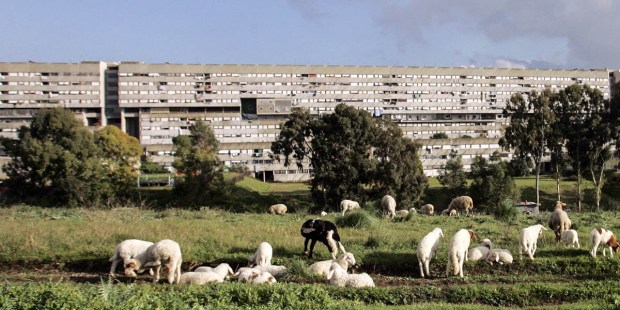 Called the Big Snake, it is more than 3,000 feet long, and has over 1,200 dwellings. The neighborhood is one of the Holy Father’s treasured “peripheries”

For his second parish visit of the year, Pope Francis will travel to a peripheral area of Rome which, according to the parish priest, is in a “dramatic situation,” the Holy See reported this week. The pontiff will visit the church of St. Paul of the Cross in the Corviale district, southwest of Rome, on April 15.

The papal vicar for the diocese of Rome, Archbishop Angelo De Donatis, and the auxiliary bishop for the western sector of Rome, Bishop Paolo Selvadagi, will welcome the pope at 4 p.m. Pope Francis will meet some catechism children, elderly people, and some of the poor and sick of the neighborhood, and hear the confessions of three parishioners. At the end of these meetings, he will celebrate Mass at 6 p.m.

The pontiff decided to schedule this visit after meeting the pastor of the parish, Father Roberto Cassano, during a Mass at the Santa Marta residence in December 2017. According to the priest, the pope “knew the situation” of this residential and historic periphery.

The structural situation of this district, said the priest, is indeed “dramatic”: many live in loneliness and poverty. It is often “sadly portrayed as a place to be afraid of,” says Father Cassano, while many “brave people live there.”

Corviale is a suburb of Rome organized around a single building, inaugurated in 1983, housing some 6,000 inhabitants. Designed by Italian architect Mario Fiorentino, the Corviale is 957 meters long (more than 3,000 feet), making it the second longest apartment building in the world, earning it the nickname Serpentone — “big snake.” This building, inspired by the Cité radieuses (“Radiant Cities”) of Marseille designed by Le Corbusier, consists of 1,202 dwellings spread over nine floors.

On March 1, 1992, the church of St. Paul of the Cross was visited for the first time by a pope: Saint John Paul II (1978-2005). Erected by a decree in July 1977, the parish inaugurated its church building on April 16, 1983. It was placed under the patronage of St. Paul of the Cross (1694-1775), an Italian priest, mystic and ardent preacher of the Passion of Christ. He is the founder of the Passionist congregation, one of whose missions is to preach spiritual retreats.