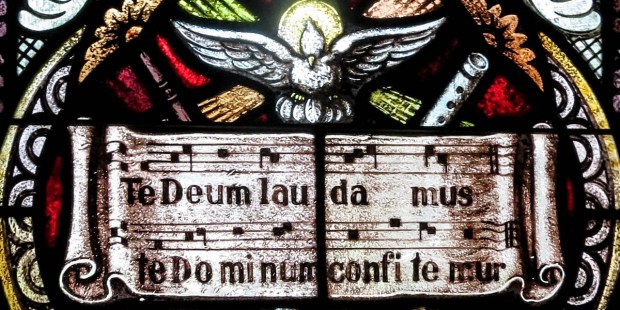 The “Te Deum” has a rich history and remains a vital part of the Church’s liturgical celebrations.

In the first few centuries of the Church, many Christians would write elegant poems with the sole purpose of glorifying God. Quickly these beautiful poems would be used by Christians in liturgical gatherings and sung in a similar way as the Psalms they chanted.

Among these poems was a collection of verses later called the “Te Deum” (see below for the complete hymn).  The authorship is generally unknown, though modern scholars point to St. Nicetas of Remesiana as the most likely candidate. He was well known for his compositions in the 4th century and was praised by his friend St. Paulinus of Nola, a bishop who is often credited with the invention of church bells.

Throughout history the hymn has been ascribed to other prominent spiritual writers, such as Sts. Ambrose, Augustine and Cyprian of Carthage. Whoever wrote it, the truth is that this poem was an ancient treasure of the Church that soon after became a staple of liturgical celebrations.

Early on the hymn became a part of the Liturgy of the Hours, sung in monasteries along with the chanting of the Psalms. It remains a required part of the recitation of the Office of Readings on Sundays (outside of Advent and Lent), feasts and solemnities. The Holy Father has a tradition of a Te Deum service at the end of each calendar year, giving thanks to God for the many blessings received.

The Te Deum is a beautiful hymn, full of jubilant praise of God and was even used outside of the liturgy to mark joyful occasions. According to Fr. Edward McNamara, “In many traditionally Catholic countries it is still common for civil authorities to assist at a special Te Deum on occasion of a royal coronation or presidential inauguration, for peace treaties and significant historical anniversaries.”

It has also been the recipient of countless musical settings by Haydn, Mozart, Berlioz, Verdi, Bruckner, Byrd, and Handel, to name a few. The more recent hymn, “Holy God, We Praise Thy Name,”  is similarly based on the Te Deum and remains one of the most popular modern hymns.

The verses also provide a beautiful meditation and can be used separately as a prayer. It speaks of God’s numerous glories and asks God to come down and “bring us with your saints to glory everlasting.”

To you all angels, all the powers of heaven,
Cherubim and Seraphim, sing in endless praise:
Holy, holy, holy Lord, God of power and might,
heaven and earth are full of your glory.

Throughout the world the holy Church acclaims you;
Father, of majesty unbounded,
your true and only Son, worthy of all worship,
and the Holy Spirit, advocate and guide.

You, Christ, are the king of glory,
the eternal Son of the Father.
When you became man to set us free
you did not shun the Virgin’s womb.

You overcame the sting of death
and opened the kingdom of heaven to all believers.
You are seated at God’s right hand in glory.
We believe that you will come and be our judge.

Come then, Lord, and help your people,
bought with the price of your own blood,
and bring us with your saints
to glory everlasting.

V. Save your people, Lord, and bless your inheritance.
R. Govern and uphold them now and always.

V. Day by day we bless you.
R. We praise your name for ever.

V. Lord, show us your love and mercy,
R. For we have put our trust in you.

Read more:
How someone’s poem became the greatest hymn of the Mass