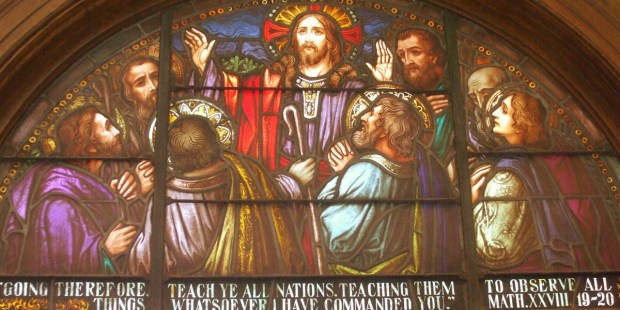 The phrase comes from Christ’s instructions at the Ascension.

When a Christian polling company asked people if they had ever heard of “the Great Commission,” the instruction Jesus gave his apostles to “go and make disciples of all nations,” 51 percent of U.S. churchgoers said they do not know the term.

As the Church prepares to celebrate the feast of the Ascension of the Lord, the poll results suggest that pastors and preachers might have an opportunity to give a lesson on the Great Commission, which is perhaps best expressed at the end of the Gospel According to St. Matthew:

The eleven disciples went to Galilee,
to the mountain to which Jesus had ordered them.
When they saw him, they worshiped, but they doubted.
Then Jesus approached and said to them,
“All power in heaven and on earth has been given to me.
Go, therefore, and make disciples of all nations,
baptizing them in the name of the Father,
and of the Son, and of the Holy Spirit,
teaching them to observe all that I have commanded you.
And behold, I am with you always, until the end of the age.”

Barna’s poll, conducted in collaboration with the Seed Company, an organization sponsoring Bible translations around the world, is contained in the report Translating the Great Commission.

While more than half of those surveyed don’t know the term “the Great Commission,” only 17 percent are also actually familiar with the passage known by this name.

Even when giving churchgoers a multiple choice test, only 37 percent correctly identified the Bible passage. five different passages from scripture and asked them to identify which one is known as the Great Commission. Sixteen percent thought the “Great Commission” is summed up in the commandment to “love the Lord your God with all your heart …,” while 8 percent felt it was “I am the way, the truth, and the life;” 5 percent believed it was “take up your cross and follow me,” and 2 percent opted for “Give to Caesar what is Caesar’s.” Fully one third were not sure if any of these passages was the Great Commission.

The misunderstanding seems to be more pronounced among younger respondents, Barna said: “More than one-quarter of Elders (29%) and Boomers (26%) says they know the text, compared to 17 percent of Gen X and one in 10 Millennials (10%).”