Why the pope wears red shoes 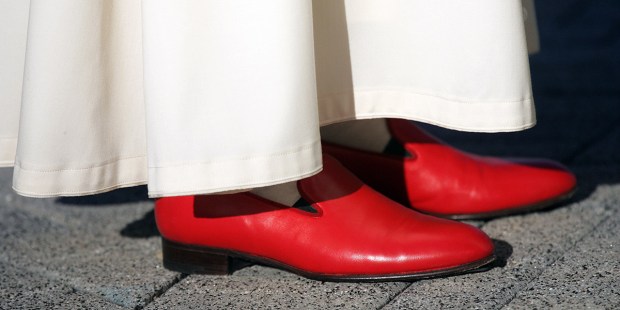 …and why Pope Francis decided not to wear them.

Perhaps many recall Pope John Paul II with his red shoes, or wonder why Pope Francis doesn’t wear them. But did you know that these shoes are as ancient as the Church itself? Or that they have a highly significant meaning?

Before starting with history, we have to clarify that most popes wore three types of shoes: red silk shoes for inside the Vatican, episcopal sandals to celebrate Mass (until 1969) according to the liturgical colors, and red leather shoes for outside. It is the latter that we’re talking about today.

Red shoes are associated with power, and not only within the Church. Pre-Roman Etruscan kings wore them as a symbol of status, because the red (which they called “royal purple”) was a costly dye obtained from rare sea snails. The Roman emperors continued with the tradition of red shoes indicating high status. The great aristocrats also wore them.

Churchmen wore them, too. Red was used not only for the pope’s shoes but for his entire vestment, although this changed to white with Pope Pius V in the mid-16th century, as he was a Dominican. Red symbolized both the worldly authority of the pope and the Passion of Christ. It also symbolized the Pope’s submission to Christ, the love of God for humanity, and the remembrance of all the martyrs who gave their lives for Christ.

Let’s take a closer look at the outdoor shoes. They are made of red leather (most of them come from Morocco) and they used to have a gold-embroidered cross. After 1958, Pope John XXIII added golden horseshoes that made them more closely resemble the shoes that bishops wore outside of Rome.

Pope Paul VI asked for the elaborate cross to be removed, and did away with the custom of kissing the pontiff’s feet. He also removed the buckles from all ecclesiastical shoes and decided not to use the silk slippers inside the Vatican.

However, the popes who succeeded him did return to the red shoes, and some were even buried with them: Paul VI, John Paul I, and John Paul II, for example. For quite some time, John Paul II set aside the bright red in favor of a more burgundy tone with a simpler look; however, Pope Benedict XVI returned to the bright red shoes made by his own shoemaker, Adriano Stefanelli.

Pope Francis chose to wear the red only indoors and opted for the black outdoor shoes he has always worn — and with which he arrived to the Vatican — as a sign of humility and austerity. They are made by the shoemaker he has used for more than 40 years, Carlos Samaria.

Meanwhile, the papal mozzetta and cape are the few pieces of the papal vestments that are still red, a symbol of the upcoming celebration of Pentecost.

Translated from Spanish by Patricia Bailey