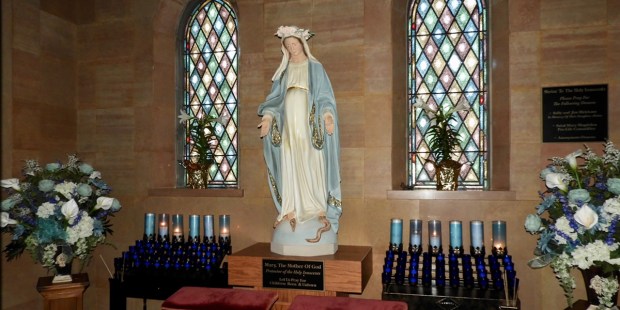 Images of a visibly pregnant Madonna are not very common in the United States. But that might change.

On Mother’s Day in 2015, St. Mary Magdalene Church in the Brentwood neighborhood of St. Louis, Missouri, opened a shrine dedicated to the unborn, especially to those who have died before birth. It is located on the west side of the vestibule, and features a statue of a pregnant Blessed Virgin Mary. The depiction of Mary is not one that has traditionally been popular in the U.S., concedes Fr. Jack Siefert, pastor, but it has been a hit with parishioners since it was unveiled three years ago.

“I walk by at various times in the day and always see someone sitting or kneeling by themselves praying in the shrine,” he said. “I have no idea what they’re praying about, but that image of the Blessed Mother with child seems to speak to anyone and everyone who visits.”

The statue was made at the suggestion of artist Michele Bowman of Restorations Plus, a St. Louis company that restores and creates religious art. She had previously restored two pregnant Madonna statues from South America for private commissions, and suggested to Fr. Siefert that such an image would be ideal for the new shrine.

She said, “Fr. Jack loved the idea. There were some who wondered the appropriateness about showing an image of a pregnant Mary, but we believed it was, especially for pregnant women or women who had lost a child before birth.”

Bowman began with a fiberglass image of Our Lady of Grace, then added a “baby bump” and a halo of roses, and hand-painted it and added gold leaf. She noted her willingness to create a similar image for other parish communities who have an interest.

In addition to the statue, two kneelers and votive candles were installed, along with a shelf on which people can write their prayer intentions. Fr. Siefert remarked, “The notes left there will bring you to tears. They’re a combination of sadness, faith, hope and love.”

The shrine and its pregnant Mary statue have been popular with visitors, agreed Bowman, as it is an image “that is good for women, good for the pro-life cause, and, for women who have regrets as to decisions they made while pregnant, it is a place where women can reflect and find peace.”

Although pregnant Madonna statues are rare in the United States, images of the Virgin obviously expecting child can be found more easily in other parts of the world, including in parts of Europe, South America and the Philippines.  They can also be popular objects of devotion in Catholic homes and are available through religious goods companies.

Dr. Mark Miravalle is a professor of theology at the Franciscan University of Steubenville whose area of specialization is Mariology and Spiritual Theology. He noted that in one of her most famous representations, as Our Lady of Guadalupe, the position of the black ribbon around her waist implies that she is with child. He said, “For that reason, Our Lady of Guadalupe is a patroness of the unborn and a powerful intercessor for the pro-life cause.”

He further noted that in Our Lady of Guadalupe monstrances, which are used for veneration of the Blessed Sacrament, the host is positioned in what would be Mary’s womb.

But whether it be a pregnant Madonna, a Madonna in different clothing, or an “ethnic Madonna,” appearing to visionaries in a different ethnicity depending on the part of the world where the apparition occurs, it all “expresses the universality of Mary as the spiritual mother of all people.”

Miravalle explained, “Catholicism is an incarnational, sacramental faith, calling us to respond to concrete and material manifestations of things that are spiritual and supernatural … [these different representations are] part of the concrete way we meet Mary, making her more real and tangible to us.”

A pregnant Madonna, such as the one in St. Mary Magdalene Church, “can be critical for mothers, who don’t want an aloof, abstract spiritual mother, but one who is personal and embracing.”

He continued, “As St. Therese of Lisieux said, Mary’s a queen, but more mother than queen. She is enthroned at the right side of Jesus, but she is also the mother at Cana, taking a risk, asking for seemingly mundane things. And, we can ask God for such things through her that are not mundane to us, because they are not mundane to her.”

Fr. Siefert is grateful to all who contributed to the creation of the pregnant Mary statue at St. Mary Magdalene, and believes it has helped make the church’s shrine for the unborn “a devotional place of comfort.”

He concluded, “People come and sit or kneel before her image and know God and the Blessed Virgin Mary are on their side.”

Read more:
Pope Francis in Fatima: “If we want to be Christian, we must be Marian”