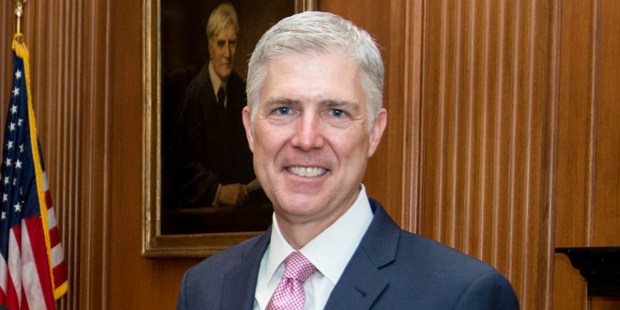 U.S. Supreme Court Justice Neil Gorsuch, President Donald J. Trump’s choice to fill the seat of the late Antonin Scalia, voted with the liberal wing of the court in a ruling that might make Trump’s plans to enforce immigration law more difficult.

The case was originally brought by a legal immigrant from the Philippines, James Garcia Dimaya, who was at risk of being deported because of two convictions for residential burglary. As the legal website Oyez explained, under the federal Immigration and Nationality Act (INA), a non-citizen convicted of an aggravated felony is subject to deportation.

President Obama’s Department of Homeland Security initiated deportation proceedings against Dimaya and claimed that his burglary convictions constituted crimes of violence under the Act. Though neither of the burglaries involved violence, the immigration judge held that Dimaya was deportable and that “burglary constitutes a crime of violence because it always involves a risk of physical violence,” Oyez said.

The INA definition of  aggravated felony includes a “crime of violence,” which is any offense that involves the use or substantial risk of physical force against another person or property.

But the 9th U.S. Circuit Court of Appeals disagreed and decided the definition of “aggravated felony” under the INA was unconstitutionally vague. The government appealed the ruling to the Supreme Court.

Both the Obama and Trump administrations defended the law. But in Tuesday’s majority opinion, written by Justice Elena Kagan, agreed that the law is unconstitutionally vague. She cited a 2015 decision, written by Scalia and supported by all but one justice, that struck down a clause of the Armed Career Criminal Act as unconstitutionally vague as well.

The 2015 decision “tells us how to resolve this case,” Kagan wrote.

Gorsuch, who did not agree with all of Kagan’s decision, wrote that “no one should be surprised that the Constitution looks unkindly on any law so vague that reasonable people cannot understand its terms and judges do not know where to begin in applying it.”

“What does that mean?” Gorsuch asked in regards to  the phrase “crime of violence.”

“Just take the crime at issue in this case, California burglary, which applies to everyone from armed home intruders to door-to-door salesmen peddling shady products,” he wrote. “How, on that vast spectrum, is anyone supposed to locate the ordinary case and say whether it includes a substantial risk of physical force? The truth is, no one knows.”

A spokesman for the Homeland Security department said Tuesday‘s ruling “significantly undermines DHS’s efforts to remove aliens convicted of certain violent crimes, including sexual assault, kidnapping and burglary, from the United States. By preventing the federal government from removing known criminal aliens, it allows our nation to be a safe haven for criminals and makes us more vulnerable as a result.“