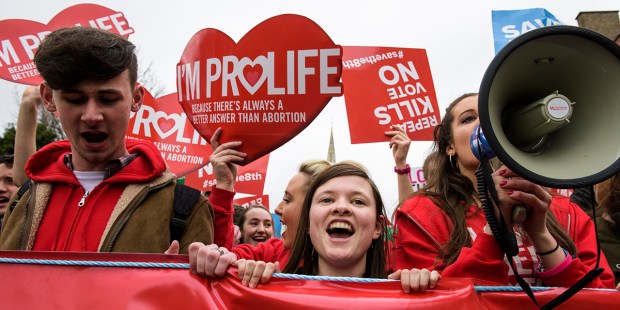 Bishop Denis Nulty of Kildare & Leighlin, Ireland, southwest of Dublin, was waiting for a train recently when he noticed a number of people gathering around a young mother. The woman had a baby in her arms, and the strangers were admiring the little one, wondering if it was a boy or a girl, the age and the name.

The scene on the platform struck Bishop Nulty as something so common and yet so wondrous.

The wonder displayed toward new life does not start at birth, however, Bishop Nulty noted. “The time a child first kicks in the womb and the time a child takes its first faltering steps are but different moments on the same journey,” he wrote in a letter to parishioners.

His reflections came as his country prepares to go to the polls next month to decide whether Ireland will continue to officially protect that nascent life. The Irish government has set May 25 for a referendum on part of the Eighth Amendment to the national constitution, which acknowledges the equal rights of mother and unborn child.

Bishop Nulty was one of several bishops who have issued statements in the run-up to the May 25 referendum.

“Some claim that we have been behind the times in Ireland in regard to abortion,” he wrote. I would argue the very opposite; that upholding the right to life of the unborn is timely and far-seeing. We risk compromising our humanity if we do not continue to be supportive of life, even when this poses great difficulties.”

Bishop Alan McGuckian of Raphoe, which includes the greater part of County Donegal, wrote in a statement that the right to life is “not given to us by the Irish Constitution or by any law.”

“We have it ‘as of right’, whether we are wealthy or poor, healthy or sick,” Bishop McGuckian wrote. “All human beings have it. For us as a society to now declare that any category of human beings should have that right taken from them is a seriously backward step. It effectively says that they don’t exist or, if they do, they do not count. That is a manifest injustice.”

The bishop pointed to scientific evidence that life begins at conception and said that that evidence is “never clearer than it is now.”

“It is a great irony that we in Ireland are for the first time in history losing our clarity about the right to life of the unborn,” he wrote. “Knowledge about the mysterious workings of DNA and the stunningly vivid evidence of ultrasound images of little persons in the earliest weeks in the womb should be making us more committed than ever to the protection of unborn life.”

Bishop John Buckley of Cork & Ross, noted that Ireland will be the first country in the world to hold a referendum to introduce abortion by popular vote.

“Will the people of Ireland decide that there is no safe place for the unborn?” he wondered. “We will be asked in the Referendum to remove the only remaining effective law to protect the unborn. We can choose to retain the Eighth Amendment, under which doctors and hospitals will protect the lives of both baby and mother to a standard of care that is considered the highest in the world, or we can repeal the Eighth and leave babies with no protection whatsoever. The legislators will then be able to propose laws for abortion right up to birth, with no restrictions and over which the people of Ireland will have no control.”

But voting no is not enough, Bishop Nulty said. “The real challenge for us is to work even harder to strengthen a culture that values all life. Being pro-life must mean that we advocate for all who are in need of protection in our society. Let us rededicate ourselves to this essential and blessed task.”