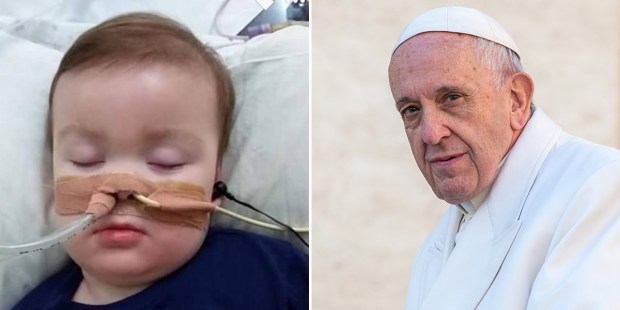 Mariella Enoc, director of the Pontifical Bambino Gesù Pediatric Hospital, has been working for months to allow little Alfie Evans to be transferred to the hospital in Rome, Vatican News reported in Italian on April 19. This initiative is being followed very closely by the Sovereign Pontiff.

Bambino Gesù Hosptial, said Enoc, is ready to welcome—at its own expense—Alfie Evans.

His current doctors have argued in the British High Court for the cessation of respiratory assistance, against the will of his parents.

The discussions with the goal of transfering the child began last July, explained the director of the Vatican institution. She herself went to Liverpool in September, as well as meeting with the boy’s father on Wednesday, after he had been received by the pontiff.

“I really could see a great determination to support their son,” she said.

The Sovereign Pontiff—who has spoken publicly about the parents’ desire to keep their child alive—supports her initiatives, she emphasized. In fact, on Wednesday, he asked the two highest officials of the Secretary of State to call her to ask her to do “the possible and the impossible” to bring Alfie to Rome.

The director of the pediatric hospital pointed out that it is not possible to cure Alfie, because there is no treatment for his illness “for the moment.” However, we can take care of him for the time he has left to live, she insisted.