The ark and the empty tomb 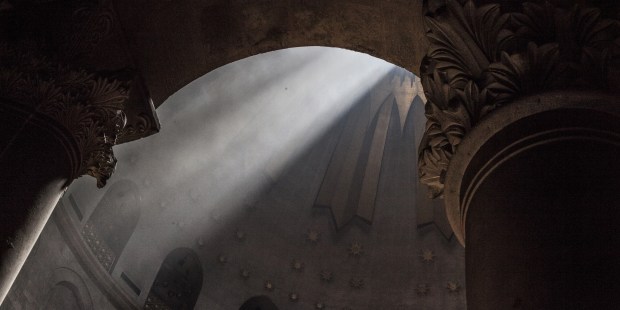 Dominika Zarzycka | Shutterstock
Images from the Church of the Holy Sepulchre, Jerusalem which houses two holiest sites in Christianity: the site where Jesus of Nazareth was crucified and Jesus's empty tomb, where was buried and resurrected. The tomb is enclosed by the 18th-century shrine, called the Aedicule.
Share
Print
Anthony Pagliarini - published on 04/19/18

Mary Magdalene encounters two angels in Jesus’ tomb, but it is the emptiness between them that reveals most. It recalls the form of God’s presence in Israel.

There’s much to see in what isn’t there. On Easter morning Mary Magdalene encounters two angels in Jesus’ tomb, but it is the emptiness between them that reveals most. It recalls the form of God’s presence in Israel and announces the new way in which the risen Christ will be present to those who receive him.

The position of these angels—one at the head and one at the foot of place where the Word of God was laid—evokes the appearance of the ark that housed the word of God to Israel. “Make two cherubim of gold,” God says to Moses and he desribes the ark’s construction, “Make one cherub on the one end and one cherub on the other end” (Ex 25:18-19). Their wings were to extended over the ark and to frame the kipporet, the “mercy seat” above which God promised to be present to Israel. “There I will meet with you, and from above the mercy seat, from between the two cherubim … I will speak with you” (Ex 25:22). So too now in the tomb of Christ do the angels frame an emptiness that is, paradoxically, the sign of God’s certain presence.

As in the story of Balaam (Num 22:21-35), the presence of the Lord’s angels is not visible by all. (Sometimes the donkey sees and we don’t.) We cannot know why Mary Magdalene witnesses what Peter and John presumably could not, but there is a fittingness between why she has come and what she is able to see. Though slow to believe, Mary’s love—the same love which drew her to the tomb in the first instance—causes her to remain. Even after the Apostles leave, “Mary stood outside the tomb weeping” (Jn 20:11), and in her abiding—itself no small theme in the Gospel of John—she becomes the first to encounter the risen Lord. Peter and John believed first (20:8), but one wonders just where it was they headed in that belief as they “went back to their homes” (20:9). Though Mary does not yet believe Jesus is alive, we might say that she searches for him all the more, even if only for his body. And, in a way that is perfectly fitting to the imagery of the ark, it is her abiding before the absence that makes her the first to hear the divine voice. In the question posed by the angel(s), themselves the medium of divine speech, God speaks for the first time in the narrative. To Mary, “from between the cherubim,” God again addresses his beloved.

Are we, then, to understand the tomb as a kind of new ark or sanctuary? No. The scene passes, and there is no question of returning to the tomb as to the Tent of Meeting outside the camp (Ex 33:7). This scene reveals, rather, something of the renewed form of Christ’s presence. “Even though,” as St. Paul would later write, “we have known the messiah according to the flesh, yet now we no longer know him that way” (2 Cor 5:16). Jesus does not rise to a given place, to the confines of the life he once lived.

He is however, not removed from creation, but is, rather, more intimately present (cf. Mt 28:20). And it is this, too, that Mary Magdalene is the first to be shown. At the sight of Jesus, she tries to embrace him only to be refused. “Do not touch me, for I have not yet ascended to the Father” (Jn 20:17). The implication of these words, of course, is that when Jesus does ascend, a fuller embrace can and will be given. By the gift of his Spirit (Jn 14:15ff.), Jesus will abide in those who receive him, in those who, as it were, stand outside the tomb weeping: “If a man loves me, he will keep my word, and my Father will love him, and we will come to him and make our home with him” (Jn 14:23). By framing the emptiness of the tomb with the two angels, John asks, then, that we understand the resurrection not as a departure but as the initial pass toward an ever more intimate form of presence—one in which “all who receive him” might become “children of God” (Jn 1:12) and thus themselves the site of the divine presence.