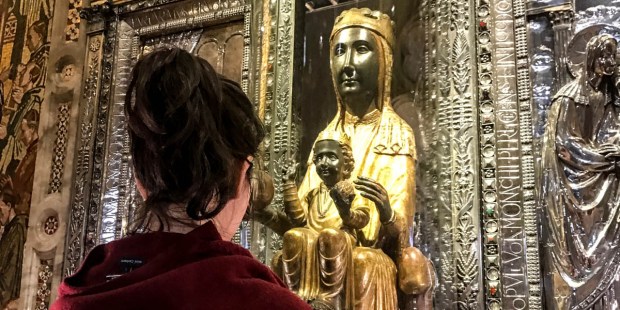 Some legends claim that the statue of Our Lady of Montserrat originated in Jerusalem in the days of the early Church.

A Spanish soldier in his mid-20s went to the shrine of Our Lady of Montserrat after recovering from a battle injury. He spent the entire night in prayer, then laid his sword down before the image of the Blessed Mother, donned the garb of a penitent, and set out on the rest of his journey, founding a missionary order of priests and becoming a great saint who would bequeath the Church with a rich legacy of spiritual practices, including the spiritual exercises, the daily examen, and an approach to discernment of spirits.

The soldier was St. Ignatius of Loyola, one of many saints, also including St. Aloysius Gonzaga, to visit the monastery of Our Lady of Montserrat. This pilgrim site hosts an average of more than one million annual visitors who come to pray before this image of the Blessed Virgin.

Some legends claim that the statue of Our Lady of Montserrat originated in Jerusalem in the days of the early Church, and was originally called La Jerosolimitana. The earliest known written history of the statue is an inscription preserved in the monastery and dating back to 1239. According to the inscription,

“In the year 808, under the government of the Count of Barcelona, Geoffrey le Velu, three young shepherds having one night seen a great light descend from the sky, and heard melodious music in the air, informed their relations of it. The bailiff and the Bishop of Mauresa having repaired, with all these people, to the spot which they pointed out, saw likewise the light from heaven, and after some search, they discovered the image of the Blessed Virgin, which they wanted to remove to Mauresa; but, being come to the place where the monastery now stands, they could not advance any farther. This prodigy induced the Count of Barcelona to build a convent of women there, from which he took the nuns of the royal abbey of Las Puellas of Barcelona; the first abbess of Our Lady of Montserrat was his daughter Richilda, who took possession of it about the year 895. This community of nuns subsisted till 976, when the Count of Barcelona, Borrell, with the consent of the pope, placed Benedictine monks at Montserrat.”

(Taken from: Life of the Blessed Virgin Mary, Abbé Orsini)

Based on this inscription, it is believed that, rather than the statue being brought to the monastery, the chapel and entire monastery housing Our Lady of Montserrat was actually built around the image. Due to the great number of visitors, and for the sake of preserving the statue, Our Lady of Montserrat is now behind glass, but one of her hands holding a sphere that represents the globe has been left exposed, for pilgrims to touch as they pass before her and beg her intercession.

Over time, the Virgin of Monserrat acquired a number of affectionate titles, including La Moreneta, a reference to the pigment of the statue, which has darkened over time, and the Rose of April, a title attributed to her in a hymn written in her honor. Her feast is celebrated annually on April 27.

The original shrine was expanded and elevated to a basilica in 1592. Pope Leo XIII presided over the coronation of the image in 1881 and named Our Lady of Montserrat patron saint of Catalonia.

Our Lady of Montserrat, pray for us!