What this Catholic dad saw in ‘The Greatest Showman’ 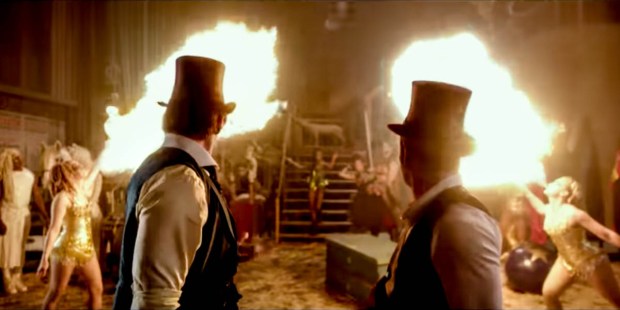 The message behind the music, the costumes and the dancing is a cautionary one. And a deeply Catholic one.

(Warning: Spoiler alert for those who have not seen The Greatest Showman)

Friday night is Movie Night at the Worner home!

And if you live in a house with an 8-year-old and an 11-year-old daughter, you will come to realize that Movie Night has (over the years) largely been comprised of The Lego Movie, Megamind, Up, The Book of Life and innumerable other animated flicks.

Oh, I know. I know. I’ve sneaked in a few shows like The Sound of Music, Singing in the Rain, The Music Man or the complete Little House on the Prairie series. But to be honest, when it comes to Movie Night, I am like the President of the United States: armed with veto power, but not capable of making laws.

And so last Friday we found ourselves watching Hugh Jackman play the inestimable P.T. Barnum in the new smash musical, The Greatest Showman.

And it was phenomenal.

Now, I’ll admit, I have a soft spot in my heart for musicals. Though I played football and baseball in high school, I was also a singer. In high school, I sang choir, was in a group of “barbershoppers” (cue the arm garters and hand-waving of obnoxious straw hats), and bellowed bass for a five-man a cappella group (named Love, Hope, Faith, Peace & Gary). Consequently, I have appreciated watching (on stage or on the big screen) the fast-paced antics or hearing the lilting beauty in The Phantom of the Opera, Les Miserables, The Producers and Joseph and the Amazing Technicolor Dreamcoat.

But The Greatest Showman impressed me on a much deeper level.

Now, if you are looking for an accurate biography of P.T. Barnum, the great circus promoter, businessman and politician, The Greatest Showman may not be your source. But if you are interested in a beautiful yarn, this musical delivers. In the film, P.T. Barnum was the son of a poor tailor who finds himself falling in love with the daughter of one of his father’s wealthy benefactors. Barnum was of a lower class than his love interest, but what he lacked in wealth he made up for in passion and imagination. The two would wed (to the great disappointment of her father) and Barnum would be haunted by a sense of ashamed inferiority for the rest of his life.

In short order, Barnum was married with two young daughters and out of work. He was enamored with exotic animals, daring feats and human oddities. As a result, he would take out a loan, hire a motley crue of medical misfits, animal handlers, trapeze artists and start up a circus. With astounding costumes, remarkable acrobatics, and the glee that can only come with the wonders of a circus, Barnum’s dreams come true. And with it comes a subtle sense of dignity for a fiercely outcast group of “freaks” now paid and lauded for their aberrations. But as his success would grow, Barnum would find himself torn in many unforgiving directions: a need for financial success to secure his family, a desire to outdo himself with bigger and better acts, and perhaps most unfortunately, a craving for respect from a higher class that Barnum felt couldn’t help looking down their noses at him. It’s as if his fervent desires become almost embodied in one of the peak songs from the opera singer, Never Enough. Ultimately, however, in the maelstrom of Barnum’s feverish desires, tragedy strikes. His family feels abandoned, his employees feel betrayed, his plan for acceptability falters and his circus is burned to the ground.

This is where I saw the true magic of The Greatest Showman.

Broken by his wife returning to her smug, told-you-so father, ruined by the public humiliation of a drummed-up scandal, and despairing in the ashes of his once great circus, Barnum needed to take stock. Who am I? Where did I go wrong? How can I make it right? Earnest plans to provide for his adored wife and to unveil for his children the limitless potential of the imagination insidiously had turned into an ego-driven pursuit of public success and vindication. Business arrangements with a class of social outcasts had transformed from the respectable to the cynically utilitarian. What began as a creative endeavor of the heart was smothered by a black hole of the soul. It all went wrong. So terribly wrong.

And so P.T. Barnum would change. And he would rebuild. His home. His friendships. His circus. His life.

To be sure, the choreography of The Greatest Showman is spellbinding. The music is inspiring and sublime. But the message behind the music, the costumes and the dancing is a cautionary one. And deeply Catholic.

Beware your ambitions. Be careful what you ask for. Never ever forget what it is you are called to do and who you are doing it for. Because it is easy — so very, very easy — to slip.

When The Greatest Showman concluded, there were two scenes (the very opening scene and the very closing scene) subtly, ingeniously linked together which (in my eyes) embodied the profound message of the story. The first was the opening scene in which a dapper silhouette of a top-hat sporting, cane-wielding P.T. Barnum is standing beneath the filled bleachers of his circus. To the nearly tribal shouts and thunderous stamping of circus-goers’ feet, Barnum chants — no, almost whispers,

Ladies and gents, this is the moment you’ve waited for.
Been searching in the dark, your sweat soaking through the floor.
And buried in your bones there’s an ache that you can’t ignore.
Taking your breath, stealing your mind. And all that was real is left behind.
Don’t fight it, it’s coming for you, running at ya.
It’s only this moment, don’t care what comes after.
Your fever dream, can’t you see it getting closer.
Just surrender ’cause you feel the feeling taking over …
Oh, this is the greatest show.
It’s everything you ever want. It’s everything you ever need.
And it’s here right in front of you. This is where you wanna be.

As the song is sung, the drums are beat and the blast of dancing ensues, the words are seductive and intoxicating. Everything you ever want. Everything you ever need. It’s here right in front of you. Mixed with the flips and the “freaks” and the exotic fineries overwhelming your vision, this scene is the tantalizing pinnacle toward which Barnum was aspiring. The circus is extraordinary, but what about P.T. Barnum’s aims? You can almost hear the same words slipping out of Satan’s mouth into Jesus’ ear during his temptation in the wilderness. It’s everything you ever want. It’s everything you ever need. And it’s right here in front of you. How can it be bad to aspire to something so good? But then we can almost hear an Eternal retort, What profit is there for one to gain the whole world and forfeit his soul?

But it seems that P.T. Barnum slowly, unknowingly is losing himself. The Greatest Showman is the tale – all too often told – of the insidious forfeiture of a soul. That is, until the closing scene, the very final scene (the second of the two pivotal scenes I mention above). As the movie concludes, Barnum has reconciled with his wife, mended his working relationships and rebuilt his circus. He is in a position of success comparable to his earlier heights. But this time, with a smile and a hearty handshake, Barnum leaves his associate in charge of the evening show. He walks away from ego and toward the necessary thing. And P.T. Barnum finds himself in the seat of a crowded theater — not the ringleader, but anonymous, except as a husband and father — as he holds his wife’s hand and watches his two young daughters grinning while dancing in a ballet recital.

And as the camera moves in — slowly, imperceptibly — with a beautifully gentle focus on P.T. Barnum, he is smiling. He is content in a way that surprises even him. And he is chanting — no, almost whispering,