Can exorcisms be performed over the phone? 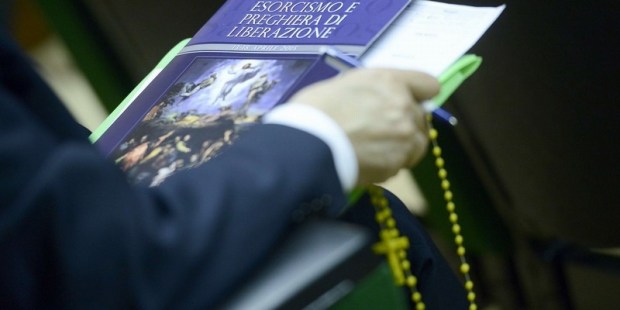 Cardinal Ernest Simoni explained at an exorcist conference that “all is possible” through Jesus.

This past week, from April 16-21, more than 250 priests and laity attended the 13th annual conference on exorcism at the Regina Apostolorum Pontifical Athenaeum in Rome. It was organized by Institute Sacerdos and hosted in collaboration with the Group for Socio-religious Research and Information (GRIS) of Bologna.

The yearly conference presents research on the ministry of exorcism and the prayer of liberation, covering anthropological, social, theological, spiritual and medical topics, as well as others.

The conference began with a keynote speech by Cardinal Ernest Simoni, from Albania. According to Crux, he “has been performing exorcisms for the past 60 years, and was introduced in the conference as one Catholic cardinal whose ministry pivots on the ritual.”

Among the highlights of his speech, Simoni explained how, “There are those who carry out an exorcism through their phones … And how is this possible? Through Jesus. We have to give space for him to act. All is possible through Him.”

Father Luis Ramírez clarified that the cardinal was referring “to the fact that one can pray over the phone, and many people call the cardinal to pray together.”

If a more formal ritual is needed after the phone call, the exorcism is continued in person with all that is necessary.

In all cases the exorcism can only be performed by an authorized priest. Lay people are never allowed to say the prayers of exorcism, though they may assist at an exorcism with personal prayers at the request of a priest.

According to the New York Times, other topics covered at the conference included, “‘The Prayer of Liberation, a Theological and Pastoral Approach,’ ‘The Auxiliary Exorcist: Skills and Duties’ … ‘Magical, Esoteric and Occult Links to Some Alternative and Energy-giving Therapies’ [and] ‘Witchcraft in Africa.'”

Exorcisms have been steadily on the rise in many places of the world, including the United States. According to an article in the Telegraph, “the number of official priest exorcists [in the US] has more than quadrupled from 12 to 50” in the past 10 years.

In his most recent apostolic exhortation, Pope Francis has reiterated the existence of the devil and the need to remain vigilant.

Hence, we should not think of the devil as a myth, a representation, a symbol, a figure of speech or an idea. This mistake would lead us to let down our guard, to grow careless and end up more vulnerable. The devil does not need to possess us. He poisons us with the venom of hatred, desolation, envy and vice. When we let down our guard, he takes advantage of it to destroy our lives, our families and our communities. “Like a roaring lion, he prowls around, looking for someone to devour” (1 Pet 5:8).

Read more:
“Padre Pio is often with me during exorcisms, and the devil fears him”

Read more:
Demand for exorcisms rises while Christian faith in the US declines