“Don Tonino”: This bishop of the people wore a wooden cross 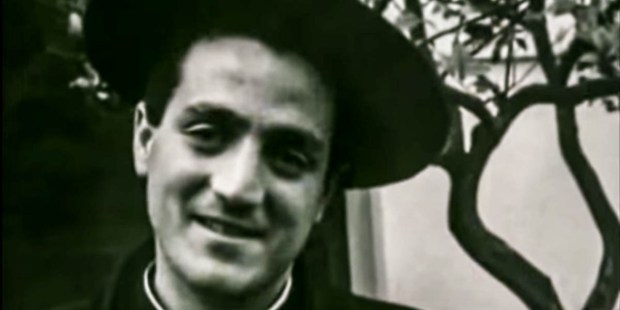 The pope’s wish for “a poor Church for the poor” would have made Tonino happy.

The municipalities of Alessano and Molfetta, in Italy’s Puglia region, are not found in most travel guidebooks. Nevertheless, on April 20, Pope Francis will visit both these cities. His visit will be a pilgrimage in the footsteps of Bishop Tonino Bello, meant to offer a model of what it means to be a bishop — and a follower of Jesus — in today’s world.

Alessano, deep in the heel of the boot that is the Italian peninsula, is a town of more than 6,000 people. It was in this village that Antonio Bello was born in 1935.

Molfetta, a city of more than 60,000 people on the Adriatic coast, is the place where Bello was made a bishop in 1982 and where he served until his death in 1993.

Throughout his priesthood and his time as a bishop, Bello modeled his life on the core values of the Gospels, opening his door and his arms to anyone in need.

“The pope’s words ‘how I would like a poor church for the poor’ would have made Tonino happy,” Bishop Cornacchia said.

Bishop Bello’s preferential option for the poor took shape in Alessano. His father, a marshall with the Carabinieri (Italian military police), died when Bello was young. His widowed mother worked hard to make ends meet while raising Tonino and his siblings. He saw first hand the struggles of the working poor in post-war Italy.

As a young man Bello entered the seminary at Ugento, but never lost sight of ordinary life. He gathered regularly with childhood friends to play soccer.

After his ordination in 1957 he was assigned to help form future priests in the same seminary where he once studied, and later assigned to be a pastor in various parishes in small town Puglia. In each of his posts his attention was focused on the disadvantaged and he put his energy into working for justice and peace.

When he was made bishop of the Diocese of Molfetta-Ruvo-Giovinazzo-Terlizzi, his down-to-earth manner, his special attention for the poor, and his thirst for justice turned heads.

On one of his first days in the diocese he took part — incognito — in a peace march organized by the student movement Catholic Action. Only at the end of the march did he reveal that he was the new bishop. The students, immediately taken with their new supporter, forged a strong friendship with Bishop Bello.

One of the students, Nichi Vendola, now a prominent Italian politician and campaigner for LGBTQ rights, told RAI Television that Bishop Bello was “an apparition. He spoke a word of truth, a word that touched people’s hearts … he had the flavour of truth, a scandalous truth that broke taboos and conventions and was not confined by liturgical formality.”

Several days later he set the whole city talking when he chose to wear a wooden cross and use a wooden crozier at his installation Mass.

He not only opened the doors of his own home to the poor and disadvantaged who came to him looking for help, but instructed the parishes of the diocese to do the same. He made sure every parish in Molfetta had a Caritas group (Caritas is the Church’s humanitarian aid agency) and he established a drug rehabilitation centre in the diocese.

All of his actions were informed by a deep prayer life. The students involved in Catholic Action recall Bishop Bello telling them it was important to be “contempl-active.” He spent long hours in front of the tabernacle and wrote deep, theological reflections on topics related to the struggles of modern life.

This combination of practical action and deep prayer caught the attention of the Italian branch of Pax Christi — an international Catholic peace movement. In 1985 he was chosen as the head of Pax Christi Italia.

With Pax Christi behind him, he took part in peace marches, and spoke out against the first Gulf War, telling soldiers to “do what your conscience tells you.” He led a peace delegation to Sarajevo in December of 1992 while the city was still caught in the middle of war.

Bishop Bello was diagnosed with cancer in 1992 but continued going about his usual activities. In fact, he led the peace march to Sarajevo in between rounds of chemotherapy. He died just a few months later, on April 20, 1993.

The cause for Bishop Bello’s beatification was officially opened in 2007.