Some things never change: This is how early Christians celebrated Mass 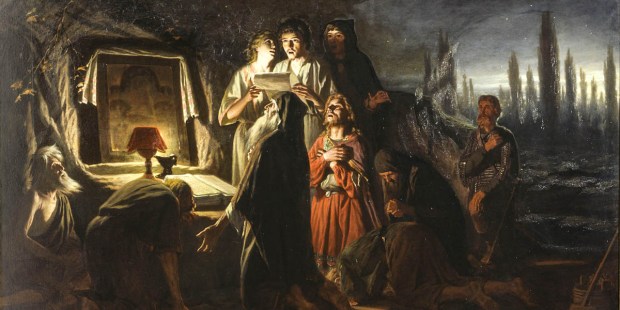 A brief comparison of liturgy from the 2nd century and liturgy today.

While there exist many different liturgical rites within the Catholic Church, each with their own unique traditions, the basic structure of the Mass across all these rites is the same as it it was in the 2nd century. When compared side-by-side, surprisingly little has changed since the early Christians celebrated the Eucharist in the catacombs and homes of ancient Rome.

The most striking evidence of this that we have exists in a document called “The First Apology,” written by St. Justin Martyr, a Christian philosopher defending the Catholic faith. In it we discover how the early Christians celebrated Mass and how similar it is to Mass in the 21st century.

Read more:
How well do you know the liturgical objects used at Mass?

“The rites that precede the Liturgy of the Word … have the character of a beginning, an introduction, and a preparation. Their purpose is to ensure that the faithful, who come together as one, establish communion and dispose themselves properly to listen to the Word of God and to celebrate the Eucharist worthily.” (GIRM, 46)

And on the day called Sunday, all who live in cities or in the country gather together to one place. (The First Apology, 67)

Read more:
This fascinating model of Rome “wasn’t built in a day”

The Liturgy of the Word

“In the readings, the table of God’s Word is spread before the faithful, and the treasures of the Bible are opened to them. Hence, it is preferable that the arrangement of the biblical readings be maintained, for by them the unity of both Testaments and of salvation history is brought out … The Homily is part of the Liturgy and is highly recommended, for it is necessary for the nurturing of the Christian life. It should be an explanation of some aspect of the readings from Sacred Scripture or of another text from the Ordinary or the Proper of the Mass of the day and should take into account both the mystery being celebrated and the particular needs of the listeners.” (GIRM, 57, 63)

[T]he memoirs of the apostles or the writings of the prophets are read, as long as time permits; then, when the reader has ceased, the president verbally instructs, and exhorts to the imitation of these good things. (The First Apology, 67)

The Profession of Faith and Universal Prayer

“The Creed is to be sung or said by the Priest together with the people … In the Universal Prayer or Prayer of the Faithful, the people respond in some sense to the Word of God which they have received in faith and, exercising the office of their baptismal Priesthood, offer prayers to God for the salvation of all” (GIRM, 67, 69)

Then we all rise together and pray … in order that we may offer hearty prayers in common for ourselves and for the baptized person, and for all others in every place, that we may be counted worthy, now that we have learned the truth, by our works also to be found good citizens and keepers of the commandments, so that we may be saved with an everlasting salvation. (The First Apology, 67, 65)

The Liturgy of the Eucharist

“At the beginning of the Liturgy of the Eucharist the gifts which will become Christ’s Body and Blood are brought to the altar … Once the offerings have been placed on the altar and the accompanying rites completed, by means of the invitation to pray with the Priest and by means of the Prayer over the Offerings, the Preparation of the Gifts is concluded and preparation made for the Eucharistic Prayer … Since the celebration of the Eucharist is the Paschal Banquet, it is desirable that in accordance with the Lord’s command his Body and Blood should be received as spiritual food by those of the faithful who are properly disposed.” (GIRM, 73, 77, 80)

[W]hen our prayer is ended, bread and wine and water are brought, and the president in like manner offers prayers and thanksgivings, according to his ability, and the people assent, saying Amen … when the president has given thanks, and all the people have expressed their assent, those who are called by us deacons give to each of those present to partake of the bread and wine mixed with water over which the thanksgiving was pronounced. (The First Apology, 67, 65)

While externally much has changed since the early celebration of the Mass, the basic structure has not changed and remains the fundamental basis for the Eucharistic liturgy.

Read more:
How are Eucharistic bread and wine made?