How my son’s wedding showed me that ‘one, holy, catholic and apostolic’ perfectly describes the Church 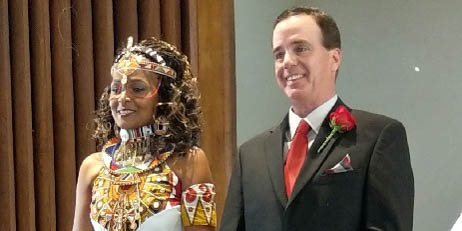 If we humans weren’t such prideful creatures, it’s unfathomable what the Church could be and do.

Every Sunday, we profess our belief in a Church that is “one, holy, catholic, and apostolic.” These four terms, known as the “marks of the Church,” reflect the essence of what She is. But when you witness those words coming to life right before your own eyes, it is an experience you will never forget.

My oldest son recently got married. I freely admit, I had my doubts about his wedding, due to a former relationship my son had been in (that was later declared null). But I had forgotten something — I had forgotten how the Holy Spirit, and not me, is in charge of building up His holy Church.

When I arrived to Holy Name of Jesus Church, I was finally able to meet Fr. George, the pastor, for the first time. Fr. George is from Kenya, as was about a third of the gathering congregation — because the bride, my future daughter-in-law Philomena, is Fr. George’s sister!

The church was filling up, and the only people I knew were those in my immediate family. Behind us, occupying the next two pews, were elderly nuns, Benedictine Sisters who lived in the monastery of St. Leo University about 40 miles north. The bride had lived with  the Benedictines while she was studying for her degree. (She had just received her Master’s Degree in Education.)

The rest were parishioners of Holy Name parish, friends of Father George. It suddenly dawned on me that there was a common denominator among all of us. Regardless of skin color and cultural experiences, we were all catholic, and would be attending Mass together as one congregation. Superficial differences were clearly irrelevant.

Father George had made arrangements for his parents to fly in from Kenya. In their late 70s, they had never left their homeland. Their presence at the wedding was to be a surprise for his sister who had not seen them in three years while she was in school. And  surprised she was.

Father George walked into the sanctuary accompanied by Father Daniel, a Mercedarian priest who is stationed at my own home parish of Sacred Heart. Father Daniel had taken my son and Philomena through their marriage preparations and would concelebrate the Mass with Father George.

Everyone stood as the bride, with her mom and dad at her sides, began to walk down the aisle. The Kenyan wedding dress that Philomena wore was something I could not have imagined. It was absolutely beautiful with its vibrant colors and a headpiece that looked like a crown.

The couple exchanged vows, and the intensity between them was pronounced. I believe everyone could feel that they meant every word they said to each other.

During the Mass, the diverse congregation sat, stood, and knelt in unison. The Sign of the Cross was made by all. Even if many of us did not speak the same language, our catholic faith united us all.

The wedding reception was attended by Americans and Kenyans. We prayed together, ate together, laughed together and danced together. They served Kenyan food alongside chicken parmigiana and pasta. Much of the music was Kenyan, while some songs were my version of “standard” pop and contemporary. The fact was, it was a wonderful wedding reception. Our differences, far from dividing us, immensely enriched us.

The significance of this marital union and the joining of such diverse families did not fully impact me until the next morning. And once again it was the Mass that framed the moment.

The following day was the anniversary of my mom’s death. She died 57 years ago, and the 8 a.m. Mass was being offered for her. I am habitually an usher at that Mass, and since I did not expect anyone from my family to be there, I was planning to get someone to assist me in bringing up the gifts.

At 7:00 a.m., I received a text message from my son. He and his new wife had decided to attend that Mass. They did not know it was for his grandma, a woman he had never even seen. The tears welled up as I watched  my son walk with his bride down the aisle with the gifts to be offered at his grandma’s anniversary Mass. The message for me was clear: “Everything is okay, Larry. Congratulations.”

Being Catholic is truly a beautiful thing. But for human pride, the Church could unite the entire world.