These nuns call consumerism the cause of human trafficking 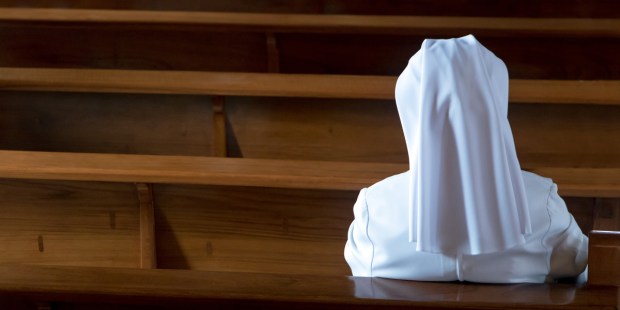 “If nobody paid for goods made with slavery, slavery would be a thing of the past.”

Citing “ignorance and greed” as motivating factors, Nigerian sister Drorthy Ezeh informed attendees of a recent Roman conference about the thriving and illegal business of human trafficking. “What they are after is money, money, money,” she said, in an impassioned plea to raise awareness of this growing horror.

Crux Now reports that the conference, entitled “Consumerism: A Push Factor in Human Trafficking,” was organized by the Justice, Peace and Integrity of Creation Commission, a body jointly sponsored by the Union of Superiors General and the International Union of Superiors General. The speakers explored the social, economic and political factors that influence the acquisition and sale of human beings.

Sister Cecilia Espenilla, of the Dominican Sisters of St. Catherine of Siena, described how human trafficking is more lucrative than other illegal enterprises; it is estimated that $150 billion a year is made off the sale of young men, women and children. She stated, “A person can be sold multiple times a day, making them more profitable,” whereas drugs or firearms are usually only sold once.

Sister Espenilla went on to note how troubling it is that perpetrators are rarely called up on charges. “You have millions of victims, but the prosecution [rate] is very low.”  She added that the victims are often too traumatized — or afraid to face their abusers in court.

“There is a fundamental belief that the lives of women and girls are expendable,” she added. “There is a general perception that they are physically and emotionally more vulnerable than men. They are controlled more easily and less likely to seek revenge than men.”

Of the $150 billion this criminal enterprise produces, it is estimated that $99 billion comes from commercial sexual exploitation. The rest falls into the category of forced labor, including: construction, industrial, manufacturing, agriculture, and fishing. Many of these workers, in all fields, are children.

Crux Now summed up the conference with a vivid description of a dystopian society of sin, which for many is a harsh reality:

Money is the engine behind not just the traffickers, but also those who enable the system. Single mothers will sell their children for money, a woman wanting to buy the latest technological gadget will give up her three-year-old daughter to child pornographers, and husbands will force their wives to prostitute themselves.

Sister Christina Gautier, who teaches moral theology at the Angelicum in Rome, contended that, “If nobody paid for goods made with slavery, slavery would be a thing of the past.” While sister Ezeh concluded, “Things like this happen because people close their eyes. The rate of sickness in our society has mounted now.”

Sister Espenilla praised Pope Francis for taking up the cause. “I’m very happy that Pope Francis has made fighting human trafficking one of the priorities of his pontificate,” Espenilla said. “Let’s take action until everyone is free; we cannot be sitting here!”