These saints were professional dragon-slayers

They destroyed evil (and deadly creatures) wherever they went.

Dragons are everywhere in Christian art and literature, especially in the lives of the saints, where these holy men and women are portrayed as triumphant victors over inherently evil creatures.

The dragons mentioned are usually taken by modern readers as symbols of evil, such as the dragon in the book of Revelation. Yet, some historians believe these stories may have also been influenced by the discovery of dinosaur fossils or tales of creatures such as the crocodile. This appears to be the case in the book of Job, where a crocodile type beast is described in detail.

Can you draw out Leviathan with a fishhook, or press down his tongue with a cord? Can you put a rope in his nose, or pierce his jaw with a hook? … I will not keep silence concerning his limbs, or his mighty strength, or his goodly frame. Who can strip off his outer garment? Who can penetrate his double coat of mail? Who can open the doors of his face? Round about his teeth is terror. His back is made of rows of shields, shut up closely as with a seal. One is so near to another that no air can come between them. They are joined one to another; they clasp each other and cannot be separated. His sneezings flash forth light, and his eyes are like the eyelids of the dawn. (Job 41: 1-2, 12-18)

Considering that many of these dragon stories originated in the Middle-East and Northern Africa (and that crocodiles there can grow up to 16 feet long), it may be possible that some of these saints really did kill a “dragon,” who was threatening the townspeople. Frequently these ancient stories mention dragons that live near the river or a different body of water and provide further evidence that the dragon may have been a crocodile.

Whatever may have been the case, the dragons in these stories remain a potent symbol of evil and are reminders of how Jesus Christ defeated Satan and how all Christians can share in that ultimate victory of good over evil.

Below is a short list of “dragon-slayers,” whose legendary adventures can give us confidence and strength in our daily battle against sin and evil. 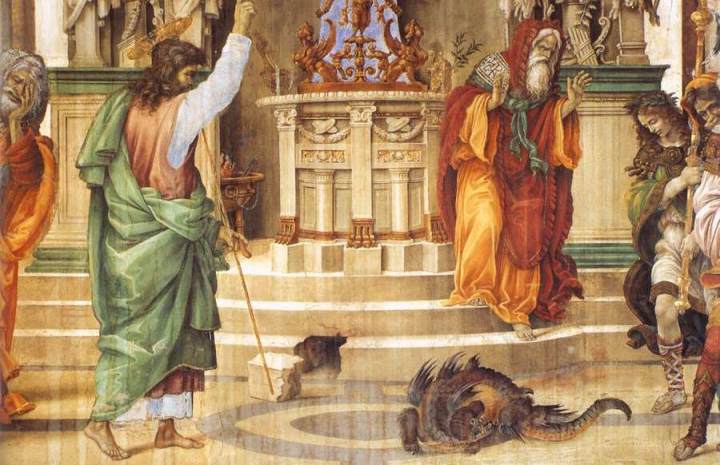 Not usually counted as a dragon-slayer, St. Philip is described in a story in the apocryphal Acts of Philip as going to the temple dedicated to Apollo at Hierapolis and casting out a dragon.

And do you know, Lord, that because of you I came into this city, and in your name I have persecuted all the error of the idols, and all the demons? The dragons and the serpents have withered away.

George was a Roman military officer of the 3rd century, and the story of his fight with a dragon is most well-known and is described in the Golden Legend.

George, a native of Cappadocia, held the military rank of tribune. It happened that he once traveled to the city of Silena in the province of Lybia. Near this town there was a pond as large as a lake where a plague-bearing dragon lurked; and many times the dragon had put the populace to flight when they came out armed against him, for he used to come up to the city walls and poison everyone who came within reach of his breath. To appease the fury of this monster the townspeople fed him two sheep every day … But George, mounting his horse and arming himself with the sign of the cross, set bravely upon the approaching dragon and, commending himself to God, brandished his lance, dealt the beast a grievous wound, and forced him to the ground.

Like St. George, Theodore was a Roman military officer in the 3rd century. He was stationed near the village of Euchdita in Pontus, where he was alerted of a dragon lurking in the forest. Arming himself with the sign of the cross, Theodore bravely went into the forest and plunged his lance into the dragon.

Strengthened by his victory, Theodore returned to the military camp and proclaimed to all that he was a Christian. He then destroyed a pagan temple and was subsequently martyred.

The story of Michael, the first dragon-slayer, and his angelic battle is narrated in the Book of Revelation.