How to tell if your child needs a therapist 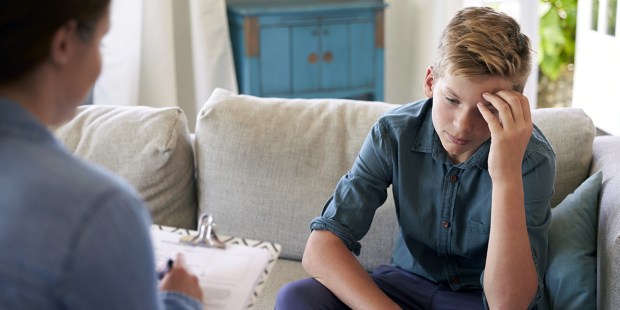 According to a pediatric psychologist, these are 5 questions a parent should ask.

Have you ever observed your child behaving in a way that made you wonder whether or not you should seek outside help, in the form of counseling? If so, you’re not alone. Whether it’s the intensity or frequency of a behavior, such as repeated anxiety in new situations, or something that causes a lot of conflict and strife at home, such as a strong-willed, defiant kid, or just an all together odd set of actions, there’s a wide gamut of behaviors that can leave parents wondering if professional intervention is needed.

While there’s no absolute set of rules or guidelines about when to seek professional help, there are a few questions to ask yourself that can help you discern whether it is time to do so…

1. Is my child’s behavior significantly impairing a critical area of functioning?

Anyone that’s been around youth long enough knows that all kids do certain things that make you say, “huh?” Especially during transition times, it’s not uncommon for kids to show transient changes in mood or behavior that not only causes stress for them, but for everyone in the household. And the more kids you have, the more potential opportunities there are for negative interactions to occur.

The question all parents should ask is whether a particular issue (or set of issues) is persistently impairing functioning in three critical areas:  school, socialization, and overall health and well-being. If a child’s academic performance starts to show noticeable decline, if they start becoming (or simply have been) increasingly withdrawn, and/or if they are staying up later at night and not eating normally, it may signify that seeking professional help is warranted.

2. Am I, as a parent, overwhelmed with managing my child’s demands?

As any parent knows, you can only give what you have. And if you’re feeling chronically overwhelmed and exhausted in managing a particular challenge that your child brings, then it’s probably time to seek help. It’s natural for us as parents to feel tired and frustrated at various times in this role. But if you find that your child’s difficulties are leaving you feeling jaded, and not able to “reset” in a healthy way, then this only increases risks for both the child and the family as a whole.

3. Is my son or daughter altering the family environment in an unhealthy way?

The previous consideration focused on a parent’s individual capacity; this one focuses on whether or not a child’s behaviors are altering the larger system in a way that’s unhealthy for anyone. For example, a child who exhibits significant mood dysregulation or defiance/antagonism that causes everyone else to “walk on eggshells” at home, and parent’s authority to be undermined, is clearly in need of professional assistance. It is noble for a parent to “do whatever it takes” to help a child, but this nobility can turn into dysfunction if the system itself becomes chaotic or perpetually tense.

4. Does my child seem in a chronic state of distress?

Anxiety and changing moods are part of being human, but when these emotional states fluctuate like waves in a stormy sea, it’s not a healthy situation. There are two ways in which a psychological condition are diagnosed: The first has to do with significant impairment and the second circumstance relates to a high level of persistent distress. Sometimes both are present in a particular condition, such as an anxiety disorder that causes changes in sleep patterns, socialization, and grades.

Sometimes a young person might seem to be “holding it together” from an outside perspective, but he or she might be “straining at the seams” to do it. This can especially be the case for teens, such as those with an eating disorder, who seem to be excelling academically and/or athletically, but are really struggling internally, which is resulting in dire health concerns.

5. Do I feel disconnected from my child and worry about the path he or she is heading for?

Of all the guidelines, this might seem like the most nebulous. Children in these situations aren’t necessarily in crisis, and parents and families aren’t necessarily feeling overwhelmed by the current situation, but the “writing on the wall” is that a youth is making decisions, often independent of parental input, that are increasingly concerning.

I’ve seen a number of families who fit this description and it is both a fearful and humbling situation as a parent to admit that this is the case. But sometimes, seeking professional help during this critical time can help avert a seriously unfavorable outcome. Parents with a high level of connection with their youth can work through more serious challenges without professional support than those parents who don’t have this level of connection. Although disconcerting, it’s important to be honest about where you stand with your child.

Ultimately, some parents will never need professional psychological services for their child, but often even the most committed, faithful parents will. Over the years, I’ve had  great admiration for parents who walk into my office, are forthright about the challenges, and are open to the possibility that they “might be part of the problem.”

Even being a pediatric psychologist doesn’t excuse me (or my wife) from personal and parental challenges that come with raising children. Nothing has humbled me more than being a parent, and if there comes a time that I need to seek outside professional assistance for my child, I hope that I’d be open to this.

In the meantime, if you are a parent discerning this question, it should be reassuring to know that sometimes, just the act of seeking out help results in improvement even before any interventions occur. Taking the first step to reach out might be the hardest, yet most critical step.

Read more:
7 Things kids tell psychologists – but are too afraid to tell their parents