If Marvel’s Avengers were saints

A side-by-side match-up of Catholic saints and Avengers from Marvel's 'Infinity War.'

This weekend sees the opening of the most highly anticipated film of the Marvel universe,

Avengers: Infinity War
. It is the culmination of an immensely successful series of movies based on characters from Marvel comic books and has sparked a renewed interest in extraordinary heroes who save the world.

Yet, while the superheroes featured in the movies possess amazing superhuman abilities, they are no match for the real life men and women who were granted incredible supernatural gifts from God and continue to intercede for us from Heaven.

Theses saints are truly inspiring and remind us that God can use anyone to accomplish his marvelous plan of salvation.

Here is a brief rundown of several members of the Avengers team and corresponding saints who share similar stories (click through the slideshow, then read the explanations below). 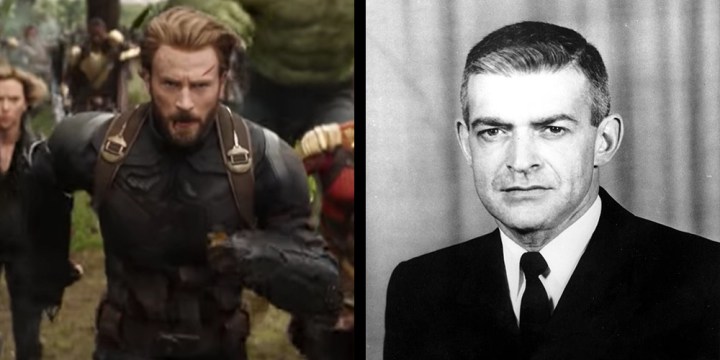 All Steve Rogers wanted to do was serve his country and save people’s lives. He was willing to give up his life for the greater good of all and became “Captain America,” a man who remained steadfast in his values.

Fr. Vincent Capodanno felt called by God to serve others, first as a priest, then as a Navy Chaplain who ministered to the needs of the Marines during the Vietnam War. He was a courageous priest, who in the midst of battle ran to a Marine in need of medical and spiritual aid. Capodanno was gunned down on the battlefield, making the ultimate sacrifice. He was awarded the Medal of Honor posthumously.

Tony Stark was a reckless young man, living the life of a playboy. Then his life changed after being captured and creating an extraordinary suit of armor. He became “Iron Man” and slowly reformed his life, seeking to save the world through his inventions. His suit had numerous capabilities, including the ability to fly.

St. Joseph of Cupertino is probably the exact opposite of Tony Stark. He was humble, ignorant and devoted to a life of simple prayer. It was through his supernatural spiritual life that Joseph was given the ability to levitate and fly to the ceiling of the church. He is the patron saint of aviation and astronauts.

Read more:
5 Saints who could fly

Bruce Banner was an amazing physicist who exposure to gamma rays turned him into a gigantic creature, full of rage and power. While Banner has repeatedly tried to control the beast that awakens within, often the “Hulk” becomes uncontrollable and creates further havoc.

St. Christopher is a legendary saint who lived during the 4th century. The Golden Legend describes Christopher as “a man of prodigious size—he was twelve feet tall—and fearsome of visage.” It is said that he carried the Christ child over a river and died a Christian martyr.

Read more:
Did the werewolf legend start with St. Christopher?

T’Challa is part of a civilization in Africa that protects an alien metal called vibranium. They have used it for powerful weapons and armor that make them fierce in battle. T’Challa becomes king of Wakanda and a formidable warrior named “Black Panther.”

St. Moses the Black was an African servant who became the leader of a gang. After hiding in a monastery from local authorities, Moses was inspired by the lives of the monks and dedicated his life to God. Yet, his physical abilities served him well in the monastery when a group of thieves tried to rob them. He fought back and dragged them to the chapel, where they converted and joined the community.

Initially a Russian spy, Natasha Romanova eventually became a member of the Avengers team where she used her skills for the greater good. Besides her physical strengths, she is an excellent strategist and military commander, knowing what is the best course of action.

St. Joan of Arc was a simple girl whose heavenly visions propelled her to lead the French army into battle. Her strategic assessments proved to be vital to their military campaigns, while many historians believe she never wielded a sword.

Read more:
5 Ways Joan of Arc was as tough as any action hero

Peter Parker was just an ordinary high school student until being bitten by a radioactive spider, giving him spider abilities and strengths. He uses these gifts to combat evil and save the world.

St. Felix was a priest during the Roman persecution of Emperor Decius. When he was fleeing from his persecutors, Felix hid himself through a hole in a wall. After he went through the hole, a spider miraculously wove a web that covered the hole, hiding him from his pursuers. He is the “patron saint” of spiders.