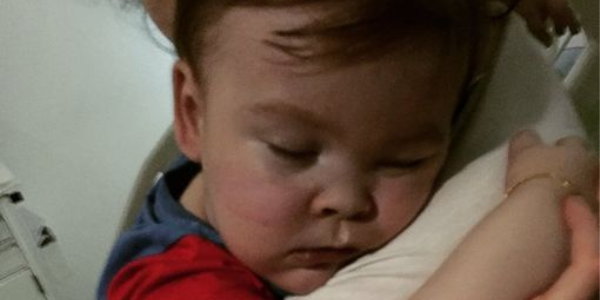 Toddler continues to breathe on his own, days after ventilator removed

In an apparent turnaround, the parents of Alfie Evans have asked supporters to vacate the premises of a British hospital where they have been protesting its treatment of the handicapped boy and have stated their intention to “build a bridge” with the institution.

“In Alfie’s interests we will work with his treating team on a plan that provides our boy with the dignity and comfort he needs,” Alfie’s Father, Thomas Evans, told reporters Thursday.

The 23-month-old Alfie suffers from an undiagnosed brain disorder and is described as being in a semi-vegetative state. Alder Hey Hospital in Liverpool has been arguing that keeping him on a ventilator was not in his “best interest” and further treatment would be futile and inhumane.

But three days after the toddler was removed from the ventilator, he continues breathing on his own. He has since been given oxygen, nutrition, and hydration.

Evans, 21, and his wife, Kate James, 20, have been conducting a legal battle to bring their child to Italy. The country granted Alfie Italian citizenship in order to facilitate the journey, and the Vatican’s Bambino Gesù Hospital offered to treat the boy. The British High Court, Appeal Court, Supreme Court and European Court of Human Rights have all rejected this alternative.

The family’s relationship with Alder Hey has been strained throughout the ordeal. Evans accused the hospital of neglect, and said they are trying to euthanize his son. On Thursday Evans told a local radio station that Alder Hey “hate us. They don’t like us. We’re not like them. It’s like we’re criminals – I feel like I’m in a maximum security and I’m just getting looked down upon.”

Later in the day, however, Evans and James met with doctors to see if Alfie could go home, the BBC reported. Afterwards, Evans read a statement to the media in which he thanked the family’s supporters but asked “Alfie’s Army” to leave the hospital grounds. He said he wants to build a new relationship with the hospital. It comes after a meeting with Alder Hey to discuss if Alfie can go home.

“We would now ask you to return to your everyday lives and allow myself, Kate and Alder Hey to form a relationship, build a bridge and walk across it,” he said. “We also wish to thank Alder Hey staff at every level for their dignity and professionalism during what must be an incredibly difficult time for them too. Together we recognize the strains recent events have put upon us all, and we now wish for privacy for everyone concerned,” he said.

Meanwhile, the parents of another boy whose medical case received global attention last year have proposed a new law that would improve the protocol to be followed in such difficult cases. The parents of Charlie Gard, who died at 11 months of age in Great Ormond Hospital in London after a tumultuous legal battle, said that when their boy was ill, they “realized that cases like these would keep happening until the law was changed,” the Catholic Herald reported.

Chris Gard and Connie Yates’ proposal for a revision in the law has not been published in detail, but it appears to take aim at the current protocol that asks judges to decide on a child’s “best interests,” giving parents little voice in the process.

Secondly, Gard and Yates suggest improved mediation between parents and doctors, to create “a platform for transparency and openness so that cases like these can be dealt with before they ever reach the courts.”