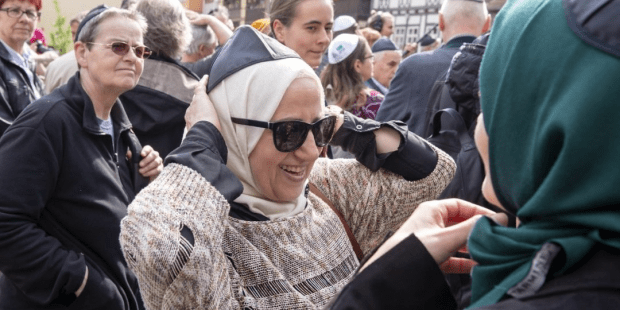 Germans of all faiths took to the streets of Berlin for the “kippah march,” on Wednesday to protest a recent rise in antisemitic sentiment in Germany. The gathering of 2,000, all wearing  Jewish kippahs, or yarmulkes, was joined by groups of Muslim women who donned the Jewish skull caps over their hijabs, standing in solidarity with the community.

Today was the "kippah march" in Germany: Germans showed solidarity with the Jewish community after a recent spate of antisemitic attacks by marching together wearing yarmulkes.

These images of Muslim women wearing kippahs over their hijabs are just stunning.#UnityIsStrength pic.twitter.com/SyDQsAqJvk

The Independent reports the protest was sparked by a recent attack of two young men wearing skullcaps in broad daylight. The suspected attacker is a 19-year-old Syrian asylum-seeker.

Reinhard Borgmann, a 65-year-old Jewish man who’s family was persecuted during World War II expressed his unease of late and praised the efforts of the Berliner protesters:

“As Jews, we want to be able to move freely, whether with kippah or without,” Mr Borgmann said. “We want to be able to practice religion in peace and not be discriminated against and not live in fear. And this event tonight is a sign and an important one.”

Many people of Berlin share in Mr. Borgmann’s concerns of Jewish safety. Elard Zuehlke, a 26-year-old non-Jewish Berliner attended the function, exclaiming, “It cannot be that in Germany there is any kind of antisemitism — not in schools, not in public, not at work, not in politics, nowhere.” He added, “This cannot be happening. Germany has to live up to its special responsibility,”

The Independent reports that there were 1,453 antisemitic incidents across Germany in 2017, and 947 of these took place in Berlin alone. The majority of these incidents are non-violent, but they have created an atmosphere that has led to 23 threats and 18 attacks.

Jewish leader, Josef Schuster drew protests from the Jewish community, on Tuesday, when he suggested that Jewish people visiting big cities should not wear their kippahs. Another Jewish leader, Rabbi Yehuda Teichtal, was staunchly against Rabbi Schuster’s advisement, stating, “Jewish identity is not something we should hide. We have to be proud of who we are and at the same time fight antisemitism.”

The recent rise in antisemitism in Germany has led the government to install a new position, Commissioner for Jewish Life in Germany. Angela Merkel explained to Israel TV:

“We also have new phenomena (of antisemitism in Germany). We have refugees now, for example, or people of Arab origin who are bringing a different type of antisemitism into the country. In the new government, we have for the first time appointed a commissioner for Jewish life in Germany and in the fight against antisemitism.”