4 Saints who were holy lawyers 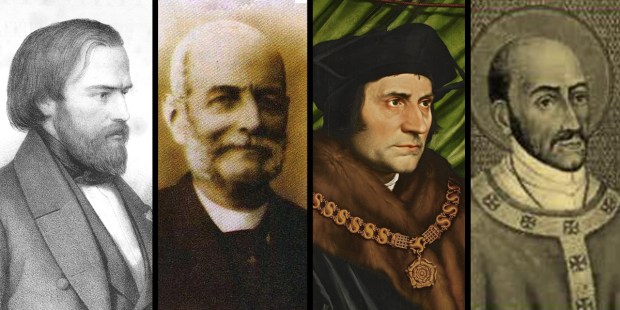 These saints strove to hold up the law and work for justice for all people.

Lawyers in general tend to have a bad reputation in modern society. They are often seen by popular culture as manipulators who will go to great lengths to win a case, bending the law when necessary.

However, not all lawyers fall into this category and in the history of the Church, many lawyers worked their hardest to fight for truth, justice and the common good.

Here are four such saints who practiced law with the desire to serve God above all things.

Luis studied civil law at the University of Santiago de Compostela, Spain and after graduating, taught there as a professor in 1839. About a year later he opened up his own law firm and for the next several decades served as a “lawyer of the poor,” fighting for justice for the oppressed. It is said that he succeeded in freeing 20,000 prisoners from death or captivity during his lifetime. One of his passions in life was the Blessed Sacrament, and he devoted long hours of prayer to Eucharistic Adoration.

Ozanam was a strong advocate of the poor, founding an organization called the Conference of Charity, which later became known as the Society of St. Vincent de Paul. He studied law in Paris in 1834, obtaining a doctorate in Law in 1836. Then after receiving a doctorate in Letters in 1839, he was appointed a professor of commercial law at Lyons in 1840. After that he became a professor of literature at the Sorbonne, but continued to work for justice for the poor in his newly formed society.

Turibius became a professor of law during the 16th century at a university in Salamanca, Spain. He was well respected and his positive reputation was rewarded by King Philip II, who appointed him as a chief judge at Granada. Soon enough he was ordained a priest and appointed archbishop in Peru. While there he fought for the rights of the native people, protecting them from being exploited.

More studied at Oxford in 1492 and then went to London to study law. He then began to pursue a political career; eventually he became a secretary and personal adviser to King Henry VIII. He then became Lord Chancellor in 1529. However, his allegiance to God and the Church of Rome over that of the King of England cost him his life.

Read more:
These saints were influential astronomers who wed science and faith together