Pope Francis: “I am deeply moved by the death of Little Alfie” 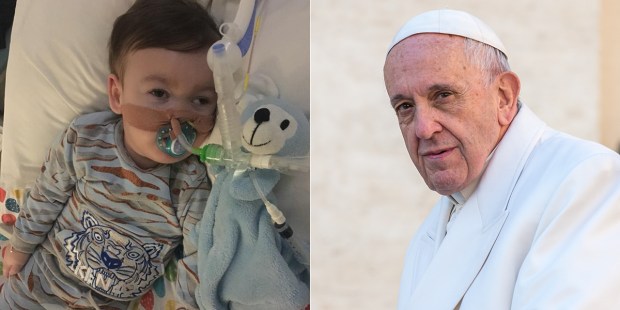 Pope Francis turned to social media to share his condolences on the death of Alfie Evans, the 23-month-old toddler with a degenerative brain condition, whose case sparked not only a High Court legal battle but also a wave of solidarity around the world.

I am deeply moved by the death of little Alfie. Today I pray especially for his parents, as God the Father receives him in his tender embrace.

Via Twitter, the Pontiff expressed his sadness, saying he was “deeply moved” by the death of the toddler, and that he was praying specially for Alfie’s parents.

Pope Francis has been following the case with particular attention. Last week, he met with Thomas Evans, Alfie’s father, and had also expressed in repeated occassions the desire that Alfie Evans be brought to the Vatican’s pedriatic hospital, Bambino Gesù, to be cared for.

The Pope tweeted his condolences after Mr. Evans revealed his son had “lain down his shield” early this morning.