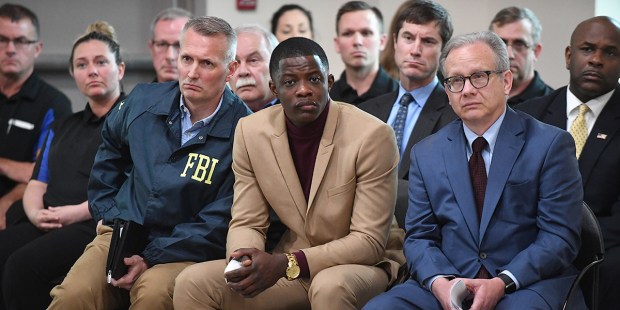 Not only did Shaw voluntarily put his life at risk when he wrested a semi-automatic rifle out of a gunman’s hands, he is now donating the proceeds of funds he’s raised to the families of the four people who lost their lives in the incident, as well as to the families of injured survivors.

Shaw launched the GoFundMe fundraiser just hours after the shooting, which took place in the predawn hours of Sunday, April 22, at a Waffle House restaurant in Antioch, Tenn. By this morning, it has raised $207,350. The original goal was a modest $15,000.

The restaurant itself, southeast of Nashville, has also pledged to help the victims’ families, saying it will donate all of its proceeds in May. Plus, a New York man launched an online fundraiser to benefit Shaw that had raised $175,000 from more than 5,500 donors, according to Fox8. The network affiliate explained the background to the story:

Shaw was sitting with a friend at the Waffle House counter when a gunman wearing only a green jacket opened fire outside the diner, police said.

Shaw bolted from his seat and slid along the ground to the restroom, he recalled. He kept an eye out for the gunman, and as soon as there was a pause in the shooting, Shaw ambushed him.

Shaw charged at the man with the rifle, and they tussled for what felt like a minute, Shaw said.

The barrel of the rifle was still hot when Shaw managed to wrestle it away, he said. He tossed it behind the counter, and the gunman fled.

The encounter left Shaw with a burn on his hand and a wound on his elbow where a bullet grazed it.

Reinking has been charged with four counts of criminal homicide. The victims ranged in age from 20 to 29.

Shaw, who is 29, is being hailed as a hero. He received a standing ovation when the Tennessee General Assembly presented him with a joint resolution lauding his bravery.

“If his heroism is equaled by anything, it is Mr. Shaw’s penchant for honesty,” the resolution stated. “He later asserted that his actions were purely selfish and that he was only trying to stay alive, but everyone else, from Mayor David Briley, to Police Chief Steve Anderson, to Nashvillians from all walks of life, disagrees.

“No matter his motivations, Mr. Shaw is indeed a hero,” the resolution continued. “His actions on that fateful morning are unfathomable to most, indescribable by even the chief of police, and very poignant to the citizens of Nashville, who are deeply grateful for his brave actions in the face of extreme adversity that saved many lives.”