Why is Pope Francis so devoted to St. Joseph Sleeping and to the Virgin Mary, Untier of Knots? 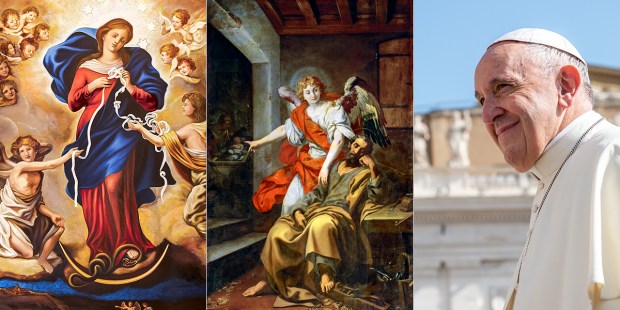 It has to do with lists of prayer intentions, and with marriage crises.

Pope Francis has special devotions that are not very well known. They are described by Fr. Marcello Stanzione in “Pope Francis, Between Angels and Demons” (“Papa Francesco fra angeli e diavoli” in Italian).

These devotions are to St. Joseph and the Virgin, but in representations that we’re not accustomed to seeing: Namely, St Joseph Sleeping and the Virgin Mary Untier of Knots.

The connection with St. Joseph

Pope Francis already had a connection with St. Joseph when he was living in Argentina. It was in the church of St. Joseph in Buenos Aires where, in 1953, the 17-year-old Jorge Mario Bergoglio discovered his vocation and declared his desire to dedicate his life to God and men.

After many years, it was on the feast of Saint Joseph, March 19, 2013, when that young boy—now a mature adult—would be inaugurated as the Pontiff and the head of the Church.

The two statues at Santa Marta

He didn’t take this journey alone. Francis wanted St. Joseph to go with him, as a discreet guide, and a protector who is silent but always attentive. Even today, in the Pope’s personal study at Casa Santa Marta, there are two statues portraying the saint.

One in particular is very dear to the Pope, and he has carried it with him since he lived at the Jesuit Major Seminary of San Miguel, where he was the rector. It’s an unusual image in the eyes of Americans and Europeans, but the devotion is widespread among South American Catholics: it’s a statue depicting St. Joseph sleeping.

While asleep, St. Joseph received messages from God, who warned him about the danger posed by King Herod and entrusted him with loving and protecting Mary and the Baby Jesus.

It was in a dream when Joseph accepted his role as putative father of Jesus and of all mankind, an archetypal figure of protector, defender, and consoler. Joseph is the attentive and tender guardian of the Family, a just man who accepts and guards the mysteries of God, as he willingly chose to accept and protect Mary, the woman chosen by God to be the Most Holy and Immaculate Mother of His only Son.

An invitation to “sleep on it”

This is why, Fr. Marcello Stanzione explains, the Pope has the habit of placing under the statue of the saint a list containing the problems, petitions, and prayers of the faithful. It’s as if he were inviting Saint Joseph to “sleep on it,” and perhaps to put a good word in before God to solve difficult situations and to help those in need, thus calling upon the saint’s role as a father who is merciful and totally attentive to those he loves.

He’s a truly special saint, who protects and helps us even while he sleeps!

A discovery in Germany

Thanks to Pope Francis, the devotion to the Virgin Mary, Untier of Knots—and the novena to her—is experiencing a boom right now in the Catholic Church. Pope Bergoglio learned of this devotion in Germany, during the year of studies when he wrote his thesis on Italian-born German theologian Romano Guardini; having fallen in love with this Marian devotion, Bergoglio spread it when he returned to Argentina.

The explanation of this devotion’s success is simple: it is a prayer whose goal is to heal the wounds caused to marriages by adultery, divorce, and the separation of spouses, which are very frequent today.

The angel and the knots

In the Romanesque church of St. Peter in Augsburg, there is a painting (probably from the 1700s) depicting Mary.

The Blessed Virgin is serene, but is totally concentrated on the task entrusted to her: untying large and small knots in a long, tangled white ribbon, offered to her by an angel on her left; she lets it fall from her hands to her right, flat and free of knots, into the hands of another angel.

Although this devotion has its remote origin in a text of St. Irenaeus, who wrote that “the knot of Eve’s disobedience was loosed by the obedience of Mary.” However, the image associated with the devotion today has a more recent genesis.

In 1612 German nobleman Wolfgang Langenmantel married Sophie Imhoff. Then, due to a marriage crisis, they were about to get divorced. Wolfgang turned to the monastery of Ingolstadt (roughly 50 miles northeast of Augsburg) for help.

After visiting the monastery on four separate occasions in a period of 28 days, he sought the counsel of Jesuit priest Jakob Rem, who, thanks to his experience, had the inspiration of entrusting this situation to the Virgin Mary, invoked with the title of “Mother Thrice Admirable.” During the following days, Wolfgang—thanks to the prayer he had recited to the Virgin Mary together with the Jesuit—obtained the grace of changes to his family situation.

In Germany at the time, it was a wedding tradition to tie the hands of the spouses together with a white ribbon, as a symbol of their union. Wolfgang’s wife Sophie had tied a knot in that ribbon after every argument with her husband. This ribbon made it into the hands of Fr. Rem, and he kept it with him as he prayed to the Virgin Mary for their reconciliation. On the last Saturday of that month, September 28 of 1615, while the priest held up the twisted and knotted ribbon and prayed before the image of Mary, all those knots miraculously untied themselves, and the ribbon became straight and flat again. From that day on, the couple were reconciled, the divorce was averted, and the couple remained together until their deaths.

The painting associated with the devotion today is said to have been commissioned by a grandson of this German couple whose marriage was saved by the Virgin’s intercession.