Pope Francis is putting his new Lamborghini up for auction 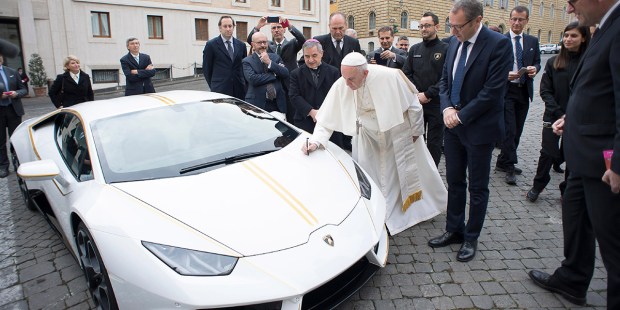 The famously frugal Pope Francis is probably the last person one would expect to drive a $200,000 sports car. In fact, the one sitting in the Vatican garage has never been driven since the Holy Father received it as a gift late last year.

Shortly after executives from Lamborghini presented the pope with a special edition Lamborghini Huracan, painted in white with yellow racing stripe to match the Vatican flag, the Vatican announced that the car would be sold at auction, with all proceeds going to charity.

The 570-horse power car comes with a papal blessing and the pope’s signature on the hood. Flashy, in an understated way, the Huracan boasts “diamond-finished 20-in. Giano wheels covering Nero calipers,” Bianco Leda Sportivo leather [trim], with Lamborghini crests adorning the headrests.”

According to Sotheby’s which is offering the car for sale on May 12, proceeds from the sale of the Lamborghini will go to “a quartet of deserving charities all near and dear to Pope Francis’ heart.”

The sale of the supercar “represents a unique opportunity to acquire a wholly unique Lamborghini while giving back to worthy causes in the name of His Holiness,” reads the auction catalog listing.

According to Sotheby’s, 70% of the proceeds will go to help rebuild homes and churches in the Nineveh Plains of Iraq, where Christians were force out by Islamic State terrorists.

The fund will help Christians “finally return to their roots and recover their dignity,” the Vatican said, according to a Telegraph report.

The rest of the money will go to charities serving Africa and Asia, and the Pope John XXII Community Association which serves the poor.