“The Surfing Padre” of Southern California dies at 92 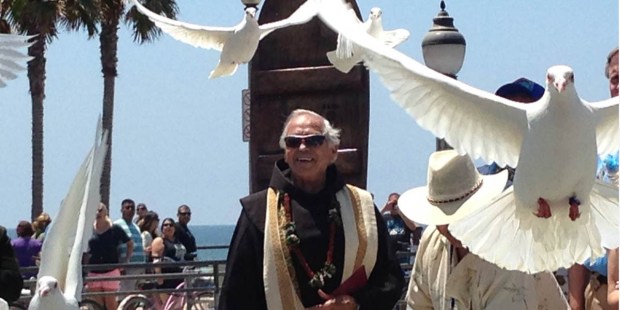 For 28 years he unified people of various faiths through his love of surfing and life.

Father Christian Mondor, better remembered as “The Surfing Padre,” passed away just two days before his 93rd birthday. It was in the latter half of his nearly 70-year career that Fr. Mondor discovered a love of surfing and started overseeing an annual “Blessing of the Waves” ceremony, which drew crowds of people of various faiths.

He was in his 60s when he began his work at Sts. Simon and Jude Catholic Church, in Huntington Beach. A competitive swimmer since he was a boy, when he found himself assigned to a parish just blocks away from the water he knew he had to take advantage of it.

“He figured that if he lived near the beach, he better learn how to surf,” his colleague Fr. Ryan Thornton explains. Mondor began hitting the waves in the early morning with the die-hard surfing enthusiasts, who would seek blessings from the joyful old priest. Before long he earned the nickname, “The Surfing Priest,” which turned into “The Surfing Padre.”

“He just loved life,” Fr. Ryan Thornton added. “The community was drawn to him because he had an extraordinary ability to connect with people.”

Eventually, Fr. Mondor became so well known that he was able to start a yearly interfaith prayer service, known as “The Blessing of the Waves.” Run alongside a rabbi and other religious leaders, the event draws yearly crowds in the thousands. Participants were always amused to see the old priest pull off his robes, revealing that he was wearing a wet suit underneath.

In 2010, Fr. Mondor talked to the Associated Press about the gathering, saying “We find that the ocean can bring people of all faiths together and since this is Surf City USA, it’s the perfect place to gather.” He also explained that the annual event was in honor of St. Francis of Assisi, patron saint of the environment.

Mondor was honored with a star on Huntington Beach’s Surfing Walk of Fame in 2013.

The annual “Blessing of the Waves” usually takes place in September. Thanks to the enormous popularity of the event, it will not end with Mondor’s passing, but it is yet unknown who will take up the Surfing Padre’s mantle.