800 Years of saving lives all started with this man: St. Peter Nolasco 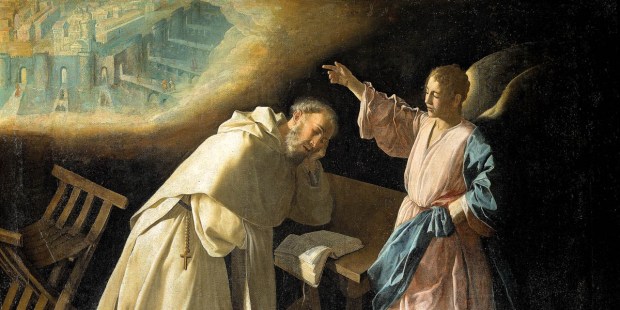 Founded in 1218, Mercedarians ransomed the lives of captive Christians; today they work with those in “modern forms of captivity.”

Peter Nolasco was known for having as his most pronounced virtue that of love of neighbor. It was said that people already knew of this when he was only a baby. The story was that while in his cradle, a swarm of bees landed on him and formed a honeycomb on his right hand. He was never harmed.

Peter Nolasco was born in Castelnaudary (located in southern France) in 1189. His well-to-do parents died when he was very young. They left Peter a substantial inheritance, and since this was the time in history when the Albigensian heresy was exploding throughout France, Peter took his money and headed to Barcelona to be as far away from the Albigensians as possible.

He was a teenager when he arrived in Barcelona and joined the army that was fighting the Albigensians in the Iberian Peninsula (most of Spain and Portugal). The army was led by Simon de Monfort.

When King Peter II of Aragon was defeated in the Battle of Muret, his 6-year-old son, James I, was captured and Peter was appointed the child’s tutor. This gave Peter standing, and after making a pilgrimage to the shrine of Our Lady of Montserrat, he began to display his charitable virtue.

Read more:
This shrine and monastery were built around an image of Our Lady that didn’t want to move

His concern for captive Christians began to build, and he decided to establish a religious order dedicated to helping these victims of the Moors, who were capturing and enslaving Christians by the thousands. He was often heard saying that he would gladly offer himself as ransom if he could.

Peter Nolasco began ransoming Christian captives in 1203. In 1218, Raymond of Penafort started a lay organization for the purpose of ransoming slaves. Peter, who was an advocate for this, decided to start an organization made up of religious members under the patronage of Mary.

In 1218 Peter also formed a congregation of religious men that today, 800 years later, is known as The Order of the Blessed Virgin Mary of Mercy. The title is summed up in one word, Mercedarians. Besides the standard vows of chastity, poverty, and obedience, the Mercedarians also take a fourth vow; they agree to exchange themselves to free captive Christians. In the First Constitutions of the Order, the Amerian Constitutions (1272): “… all the brothers of the Order must always be gladly disposed to give up their lives, if it is necessary, as Jesus Christ gave up his for us …”

St. Peter Nolasco never lost sight of the fact that he would join with the Blessed Virgin to advance his ministry. He knew that saving the captives could never be accomplished without help from the Mother of Jesus. Mary is linked to the program of liberation. She is the model for all redemptive work. He knew that Our Lady was the one who reinforced and guaranteed all of the apostolic works that would be undertaken.

St. Peter Nolasco discovered that Mary was the foundation of freedom and mercy, so much so that the order founded by him is called the Order of the Blessed Virgin Mary of Mercy.

From that point forward all Friars, Sisters, and the Third Order always considered Mary as the Mother of Freedom. She is the one who sustains and encourages the order with her ever continued and ongoing presence. The Blessed Mother came to Peter Nolasco and helped him realize that the mystery of God’s redemption is visible in the captivity and heartache of those held against their will. To this very day, they will offer themselves by trading their very selves for the freedom of another.

“Today, friars of the Order of Mercy continue to rescue others from modern types of captivity, such as social, political, and psychological forms. They work in jails, marginal neighborhoods, among addicts, and in hospitals. In the United States, the Order of Mercy gives special emphasis to educational and parish work.”

Pope Gregory IX gave the Church’s official seal of approval to the Mercedarian order in 1230.

St. Peter Nolasco, please pray for us all.

See articles on other members of the Order of the Blessed Virgin Mary of Mercy: