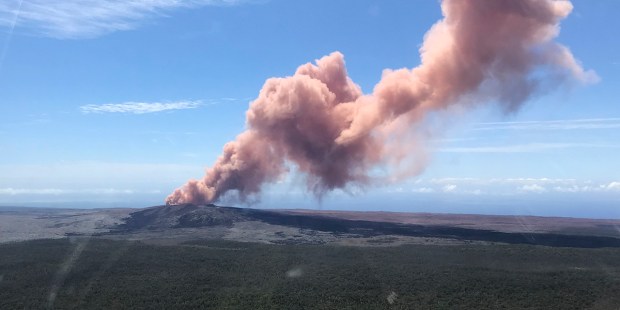 Hawaii’s governor has issued a mandatory evacuation order for parts of the Island of Hawaii, as Kilauea Volcano began to spurt lava and threaten residents.

At one point, lava fountains were shooting 150 feet in the air, and molten lava spread out over an area about 200 yards wide behind one house in Leilani Estates, Big Island resident Ikaika Marzo told the Honolulu Star-Advertiser.

“The danger is of such magnitude that it warrants preemptive and protective action in order to provide for the safety, health and welfare of the residents of Leilani Estates and surrounding areas,” Ige tweeted.

Resident Jeremiah Osuna captured drone footage of the lava burning through the trees.

“It sounded like if you were to put a bunch of rocks into a dryer and turn it on as high as you could,” he told Honolulu television station KHON. “You could just smell sulfur and burning trees and underbrush and stuff.”

The eruption comes after days of earthquakes rattled the area’s Puna district, USA Today explained. A magnitude 5.0 earthquake was recorded hours before the eruption began Thursday.

But volcanic activity is not unusual for Hawaii, the newspaper said, quoting geophysicist Jessica Johnson. “This eruption is typical of Kilauea,” she said, noting that Kilauea is one of the most active and well-monitored volcanoes in the world.