Kanye West, Jordan Peterson, and the allure of Catholicism 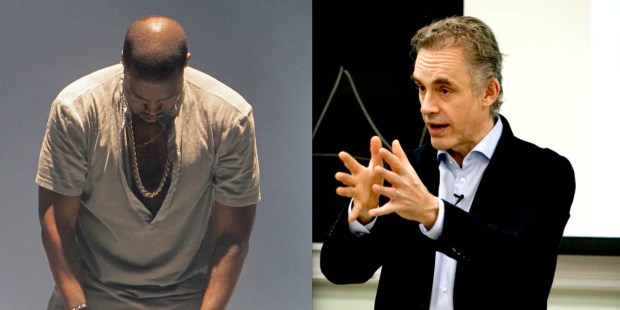 Could the rapper behind “Jesus Walks” cross the Tiber?

Kanye West has returned to the spotlight—and needless to say, people are paying attention.

The musician, fashion designer, and overall headline-grabber had effectively vanished during 2017 after a very stormy and very publicized period in late 2016 involving the robbery of his wife Kim Kardashian, long-winded stage rants, and a nervous breakdown (or, as he prefers to call it in now, “breakthrough”) and subsequent hospitalization at the UCLA Medical Center.

His return to Twitter in mid-April took a controversial turn when Kanye started expressing support for Donald Trump (even donning a red “Make America Great Again” hat) and conservative commentators like Candace Owens.

Throughout all of this, Kanye has emphasized his own freedom of thought, a spirituality of love, and creatively breaking down social barriers (if only to prove they can be broken). But the political and media establishment has been either wringing or clapping their hands at the idea of a conservative Kanye West.

But in the midst of all of this debate—some of it sincere, some of it snarky—there is one story that really caught my attention. In one tweet, Kanye filmed a video playing on his computer, and as many have pointed out, you can see another tab open in the browser: the video “Why You Need Art in Your Life” by Jordan Peterson.

To my mind, this raised a far more interesting question than “Is Kanye becoming a conservative?” And it’s this: “Could Kanye become a Catholic?

I say it because there’s something about Peterson’s psychological explorations—which Kanye’s creative explorations have apparently latched onto—that clearly and distinctly echoes the Catholic tradition.

Consider Peterson’s video, the one Kanye was apparently watching. Peterson opens by talking about a painting of the Assumption of Mary at the Metropolitan Museum of Art in New York. He goes on to talk about art being “sacred,” a “window into the transcendent,” and part of “the covenant with God”; about the “magnificent and beautiful” art of Europe over 2,000 years; about the balance between light and structure in the Gothic cathedrals; about the Catholic Basilica of the Sagrada Familia in Barcelona; and about beauty being a “pathway towards God,” an “invitation to the divine,” and a stumbling toward “the kingdom of God.” If all that weren’t enough, the video itself is extracted from the Abraham portion of Peterson’s lecture series on the Bible.

This is a veritable feast of Catholic language. It’s especially recognizable if you follow the work of Bishop Barron, who has consistently talked about the importance of the beautiful as a gateway into the divine. (Peterson even rails against those who prefer “beige” to the vibrant colors of art, a clear echo of the Bishop’s lament over “beige Catholicism.”) So it’s no surprise that people have asked if Peterson could become a Catholic, or that Bishop Barron has spoken favorably of the Jordan Peterson phenomenon, or that his commentary caught Peterson’s attention.

What’s surprising, though, is that Peterson’s “Catholic connection” is opening many people up to Catholicism who might not otherwise have looked twice at it. One YouTuber commented: “Peterson is the reason I became a Christian. And then a Catholic.” “Peterson to Father Mike Schmitz to Bishop Barron,” another wrote. “That was my path from 20 years agnosticism to becoming a Catholic.”

What’s even more surprising is that somehow, some way, Kanye West finds himself in the middle of this whole conversation. As someone pointed out, even his recent interview with Charlamagne could be seen as a kind of reaching out for Catholic ideas.

Could the rapper behind “Jesus Walks” cross the Tiber?

As both a longtime fan of hip-hop and a cradle Catholic, I’m aware how absurd this sounds. Popular opinion dictates that hip-hop and the Catholic Church are about as alien to each other as you can get. But setting aside obvious differences in gravity and purpose, consider this: they both started as very small, localized movements that exploded into global popularity, transcending nationality, ethnicity, and social status; they both emerged out of the roots of an earlier tradition; they both celebrate music, dance, art, and the power of the written word; they both have an interior logic and a certain set of “rules” meant to enhance freedom and joy; and they both beam with pride in the treasure that they possess—or more accurately, that possesses them.

Kanye’s other preoccupation, fashion, also seems antithetical to Catholicism at first blush. But look again: the Catholic Church has always put a peculiar emphasis on liturgical clothing. In fact, the Metropolitan Museum of Art will be hosting an exhibition this year titled “Heavenly Bodies: Fashion and the Catholic Imagination,” which examines “fashion’s ongoing engagement with the devotional practices and traditions of Catholicism.” As Peterson’s video illustrates, the Catholic Church is all about visible, tangible, creative expressions of beauty and spirituality—and this includes clothing.

Now, a tweet of a tab with a video is nothing to get carried away about. And I fully recognize that both the music and life of Kanye West have gone in strange, often unrecognizable directions that lost many early fans like myself. And judging by his tweets, loosening the grip of his ego and its vague spirituality of “love” long enough to see that love is God, and God is Christ, and Christ’s body is his Church, would be a herculean operation of grace.

But as his disciples know all too well, God works on his own timeline, and he works in mysterious, surprising, and yes, herculean ways. In fact, nothing in this world is impossible for him—not even a Catholic Kanye.