Inside view of cathedral

The combination of Western and Islamic architecture makes the “Mezquita” one of the most distinctive religious structures in the world.

The Cathedral of Our Lady of the Assumption, a Catholic cathedral in Córdoba, a city of 320,000 people in Spain’s Andalusia region, is the largest Catholic church in the country and one of the most fascinating places of worship in the world.

Click “Launch the slideshow” in the image below for an up-close look: 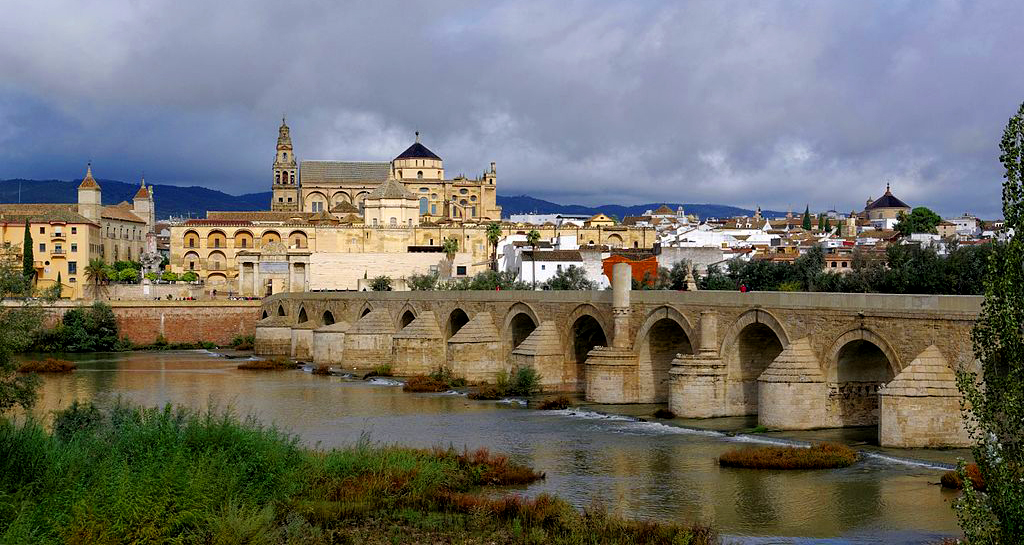 Featuring a blend of  Visigoth, Roman, Byzantine and Moorish architecture, this 5.9 acre church stands as a testament to the diverse history of this part of the Iberian peninsula.

It is believed that the first building to be erected on its site was a Roman temple dedicated to the god Janus, which was later turned into a rectangular church by the Visigoths—a Germanic tribe who converted to Christianity after seizing Rome—when they invaded Cordoba in 572.

In 748–750, the Umayyads, a Muslim dynasty that ruled the Umayyad Caliphate, was overthrown by a rival family, the Abbasids. The last Umayyad ruler, Prince Abd al-Rahman I, fled to Southern Spain and gained control of much of the Iberian peninsula, setting up the kingdom of “Al-Andalus” that would eventually include Portugal, Southern France and the Balearic Islands.

Abd al-Rahman I, also known as “The Falcon of Andalus,” choose Cordoba as the capital of the new territory and tried to recreate the grandeur of his Damascus palace in the Spanish city. He ordered that the Visigoth church be transformed into a majestic mosque, with grounds featuring plants and flowers imported from Syria.

Between the years 883 and 987 the mosque underwent further expansion ordered by Abd al-Rahman’s successor, including the creation of a new minaret and the completion of the orange tree courtyard and the external naves.

In 1236, King Ferdinand III of Spain seized control of Cordoba as part of the “Reconquista”—a campaign led by Christian states to take back territories occupied by Muslim rulers—and turned the “Mesquita,” as the mosque was called, into a Roman Catholic church.

However it was not until the 16th century that new “Christian” elements were added to the existing Islamic structure. In 1523, Bishop Alonso Manrique ordered the construction of a cathedral within the mosque featuring Western elements such as Baroque altar vaults and Renaissance domes. The minaret, a tower used in mosques to call the faithful to prayer, was enclosed by a squared bell tower.

This combination of Western and Islamic architecture makes the “Mesquita” one of the most distinctive religious structures in the world.

It is composed of a large prayer hall, an external courtyard surrounded by a covered walkway and a gorgeous orange grove.

The internal prayer hall features a series of red-and-white arches made of stone and red brick standing over 856 twin columns, giving it a strong chromatic identity and labyrinth-like effect.

The main focal point inside the hall is a Moorish style horseshoe-arched “mihrab” (a niche that serves to indicate the point closest to Mecca inside mosques) which now serves as a prayer niche. The horseshoe arch is a one of the most distinctive elements of Arabic architecture and it features in multiple locations inside the mosque-church, including the lower tier of arches in the prayer all and the entrance arches.

The imposing “mihrab” is decorated with gold and glass tesserae that create a brilliant combination of blue, brown, and gold when light shines in. Above the arch stands an equally impressive dome made of a ribbed vault decorated in gold mosaic following a radial pattern—a forerunner of the Gothic vault style.

As architectural historian Nuha N.N. Khoury put it, Cordoba’s mosque-cathedral “lies at the crossroad between past and future,” combining influences from the ancient Umayyad tradition with new architectural elements that originated across centuries in the constantly changing cultural and religious paradigms of Al-Andalus.

Each year, an estimated 1.5 million tourists from all national, religious and cultural backgrounds visit this impressive landmark that stands as an architectural testament to the vibrant and diverse culture of Andalusia.