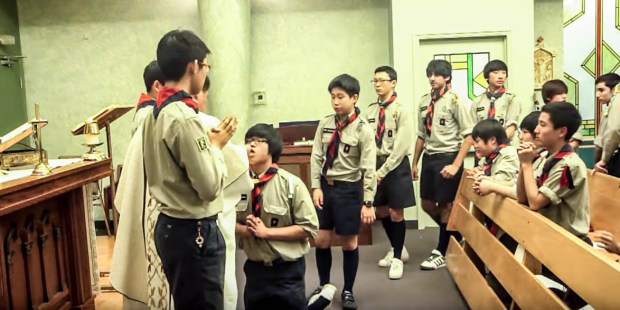 The International Union of Guides and Scouts is a Catholic scouting movement that is spreading around the world.

The International Union of Guides and Scouts of Europe (U.I.G.S.E.) is a “public association of the faithful” within the Catholic Church and has as its purpose to “bring together in the same community of faith, prayer and action … to prepare and educate young people through the practice of the traditional Scouting [method] of Baden-Powell.”

Furthermore, “It views Scouting as a means of performing the apostolate in the Church, and therefore as a tool for providing Christian instruction for men and women practising the Gospel values in their service to the world.”

The U.I.G.S.E. trace their spiritual lineage to Venerable Jacques Sevin, an influential French priest who pioneered the Catholic scouting movement. In fact, he personally met Lord Baden-Powell, a British Army officer of the early 20th century who wrote an influential book entitled Scouting for Boys. Powell’s book would be the foundation of similar scouting programs across the world, including the Boy Scouts of America. (Note: The U.I.G.S.E. is not affiliated with the Boy Scouts or Girl Scouts, Troops of St. George or any other similar movement.)

Baden-Powell was deeply impressed with the implementation of his ideas by Father Sevin. It impressed him so much that Baden-Powell famously said about Father Sevin, “He made the best realization of my own thoughts.”

After World War II several Catholic scout chiefs in Europe sought to solidify their unique scouting organization and on November 1, 1956, in Cologne, Germany, their idea came to realization. Eventually the organization clarified its mission and was officially recognized in 2003 by the Vatican as a “public association of the faithful.”

According to its website, “the U.I.G.S.E.-F.S.E. is an educational movement aiming at forming good Christians and good citizens, considering in youth:

St. John Paul II addressed members of this scouting movement in 1998 and praised their activities, “The meeting of the Scout method with the insights of Fr. Sevin, S.J., has made it possible to develop an educational program based on Gospel values, in which each young person is led to grow and to develop his personality, thus making his talents fruitful.”

It is currently active in about 21 countries with over 65,000 members worldwide. Since 1999 the movement has expanded to North America, under the Federation of North American Explorers.

Read more:
The Eagle Scout on his way to sainthood

Read more:
Meet Stephen Kaszap, a Boy Scout and gold-medal gymnast on his way to sainthood