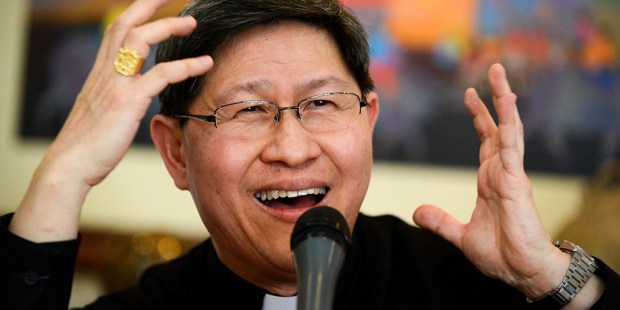 The archbishop of Manila joins other religious leaders in conference for migrants and refugees.

Cardinal Luis Antonio Tagle is the archbishop of Manila, and at 60 he still has a youthful aura about him. Even before the election of Pope Francis five years ago, he was mentioned as papabile. Like Cardinal Jorge Bergoglio, he has a man-of-the-people reputation. As the archbishop of Buenos Aires took the subway to work, Cardinal Tagle has been seen commuting—on a bicycle.

Since 2015, though, he’s spent a good deal of time on airplanes, traveling the world in his role as president of Caritas Internationalis. On Thursday he was in New York, sharing a platform with a compatriot, Archbishop Bernadito Auza, who represents the Vatican at the United Nations.

The two prelates were joined by leaders of other churches and faith traditions in a program titled Sharing the Journey of Migrants and Refugees: An Interfaith Perspective on the Global Compacts. The “global compacts” in the title referred to documents now being hammered out at the UN in New York and Geneva to come to an international agreement on how to respond to a growing crisis in refugees and migration.

Sponsored by the Holy See Mission to the UN and Caritas Internationalis, along with its Sharing the Journey campaign, the event was a way to shine a spotlight on the ways faith-based organizations provide “so much of the infrastructure for immediate and long-term hospitality and accommodation, defend the rights of refugees and migrants independent of legal status, ensure through education, professional and social inclusion that they’re able to achieve their potential as human beings and enrich them and the societies that embrace them through the exchange of talents and culture,” said Archbishop Auza.

“It is a singular opportunity to show our solidarity with the millions of people in different parts of the world who have been uprooted from their places of origin and often face a desperate ordeal,” said Archbishop Auza, three years since a massive influx of migrants and refugees from the Middle East and North Africa into Europe put the issue at center stage. “It’s an occasion through international cooperation and responsibility sharing to find long-term and sustainable solutions among all stakeholders to the root causes of these large movements of people, to increase capacity in countries of origin, transit and destination to care for them in a way that respects their human dignity and rights while respecting national sovereignty.”

During recent negotiations on the global compacts, “some have questioned the relevance” of faith-based organizations to the response to the refugee crisis,” the archbishop said. “But as today’s event hopes to show, we are not only relevant but crucial to help migrants and refugees.”

Indeed, faith-based organizations are present at all points of the migratory journey, “often filling gaps in services that governments and other civil society actors are incapable or unwilling to fill on their own,” Archbishop Auza stated.

Cardinal Tagle—known familiarly as Cardinal Chito—shared a personal story with the gathering about his own family experience with migration. His grandfather was born in China, but his widowed mother, who had no means to rear him properly, gave him to an uncle, who engaged in trading in the Philippines.

“The boy migrated to the Philippines, started a life, got married, and had nine children, the third of whom is my mother. He probably did not imagine that one day, he would contribute a priest, a bishop, a cardinal to the Philippines.

“I have migrant DNA, and I am sure you do too, he told the gathering in the UN’s Economic and Social Council hall.

The Judeo-Christian tradition reminds us that migration is about human persons,” the cardinal explained. “Migrants are persons. Refugees are persons. They have human stories and dreams. But some sectors of society want to erase their faces: ‘They do not belong to us. They are strange. They will be a burden to us. So we refuse to see them. They do not exist.’

“Then, the Hebrew Bible rings loudly: ‘Love the stranger, because you were all strangers in the land of Egypt.’ … The memory of being a stranger in a foreign land should enable Israel to love, not just tolerate, the immigrant, he said.

“We invite everyone here never to forget that in our families, clans or people there must have been a migrant or a refugee some time, somewhere,” he said. “In their name, the God of Israel calls us to love the stranger.”

For Christians, the migrant or refugee has a human face, he said: that of Jesus Christ, who deeply identified with the migrant, holding up the “stranger” in much of his teaching, such as the Parable of the Good Samaritan, and in declaring that “When I was a stranger, you made me welcome.”

“In recent years, Pope Francis has  given impetus to this faith perspective by calling for a culture of personal encounter with migrants, refugees and people excluded by contemporary society,” the cardinal continued. “I have observed that some people who are afraid of migrants or refugees have had very little personal contact with them…. By meeting them, touching their wounds, listening to their stories and dreams, we might see ourselves in them. They are not strangers. They could be me, my parents, my brothers and sisters, my friend.”

That is the idea behind the “Share the Journey” campaign of Caritas Internationalis, which draws inspiration from guiding principles established by Pope Francis, he said: