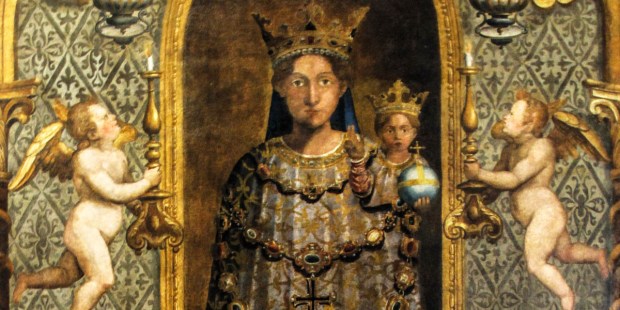 The Litany of Loreto is frequently used in the Catholic Church and has a fascinating history.

In the Catholic Church there are thousands of prayers contained in her rich treasury of spiritual writings. Among them, the Litany of Loreto is one of the most popular and well-known prayers. It is a beautiful prayer, one that has a rich history.

While some spiritual writers claim that it can be traced back to St. Gregory the Great or even to the Apostles, most historians believe that the Litany of Loreto was composed in the late 15th to early 16th century.

According to the Catholic Encyclopedia, “The most ancient printed copy hitherto discovered is that of Dillingen in Germany, dating from 1558; it is fairly certain that this is a copy of an earlier Italian one, but so far, in spite of much careful research, the oldest Italian copy that the writer has been able to discover dates from 1576.”

It is believed that the litany was initially adopted by the miraculous shrine in Loreto, Italy, where tradition claims the original house of the Virgin Mary was transported. The shrine was immensely popular in the 15th and 16th century, attracting pilgrims from all over Europe. As a result, many of these pilgrims took the litany they heard with them and it became very popular in their hometown churches.

Shortly after the litany was composed it was in danger of being forgotten forever, as the pope at the time did not especially like it. However, the priests of the shrine preserved it and it was sung every Saturday in Loreto. By the 17th century the litany became popular in the city of Rome and was sung frequently at the Basilica of St. Mary Major. Ever since, it has remained one of the most popular litanies of the Church.

Looking for more prayers? Check out our page of “Prayers for a Particular Need.”

God, the Father of heaven,
have mercy on us.

God the Son, Redeemer of the world,
God the Holy Spirit,
Holy Trinity, one God,

Lamb of God, who takest away the sins of the world,
spare us, O Lord.

Lamb of God, who takest away the sins of the world,
graciously hear us, O Lord.

Lamb of God, who takest away the sins of the world,
have mercy on us.

Pray for us, O holy Mother of God.
That we may be made worthy of the promises of Christ.

Let us pray.
Grant, we beseech thee,
O Lord God,
that we, your servants,
may enjoy perpetual health of mind and body;
and by the intercession of the Blessed Mary, ever Virgin,
may be delivered from present sorrow,
and obtain eternal joy.
Through Christ our Lord.
Amen.

Read more:
A powerful litany for those sick and suffering