How can I see Christ in him if I won’t even look at him? Discerning my obligation to the poor 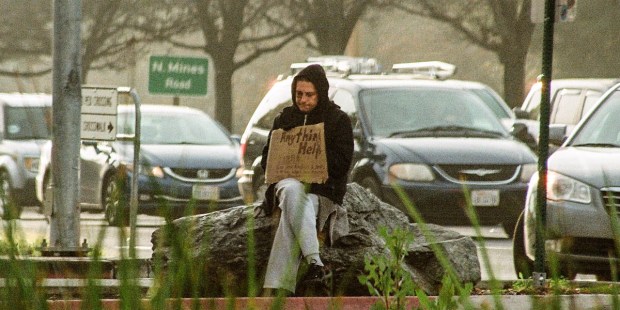 Only a pane of glass, a couple feet — and my own guilt — separate me from my brother.

I used to dread the red light that stopped me at the busy intersection next to a wearily downcast homeless person, holding a crumpled cardboard sign. Trying to read the sign out of the corner of my eye, I would dare not make eye contact. I’d self-consciously fumble with trash in the car and CDs in my console – anything to avoid the emotional whirlpool that swept over me.

My head was a scrambled steam of consciousness, reasoning through poverty and my obligation to the poor. I considered my worthy monetary donations and the bad intentions this person might have with my $5. Suddenly I was a banker, parole officer, and social worker — dismissing the person for their series of bad choices, stemming from severe mental illness.

All the while, those empty pleading eyes were only separated from mine by a pane of glass in my driver-side window.

As I became more and more agitated by these situations, I needed to answer the question, “What is my obligation to the poor?” At the root of my guilt was not the money or the begging, but the fact that I couldn’t engage with this individual. The “social norm,” which taught me to roll up my window, lock my doors, and pretend this person wasn’t two feet away, potentially in a situation of desperation, was what bothered me.

Understandably there are safe boundaries, but refusing to acknowledge another person’s existence is certainly not what we, as Christians, are called to do. Perhaps you’re more comfortable handing over the granola bar from your lunch or offering a few Hail Marys instead of money. Either way, it’s ultimately the encounter that is meaningful — because there is no way to bring Jesus to others without an encounter.

If I have a “Jesus loves you” bumper sticker or rosary hanging from my mirror and can’t even offer a smile to a person in need — for fear of the guilt it will inflict upon me — then I am doing more harm than good with my “witness.”

A dear friend of mine used to pull up to every homeless person on the side of the road and, rolling her window down, loudly greet him. She would offer spare change, and asking his name, assure him of her prayers. Meanwhile, I would sink down in the passenger seat.

The gift of my friend’s encounter — in recognizing the humanity of the other person, despite outward appearances — would not leave me. It inspired and transformed me. I wanted to see Christ in all and be Christ for all.

Now I travel with a box of granola bars. I find great joy in the opportunity to share with a beggar. I smile as I roll my window (half-way) down to greet him and offer a prayer. Not as a benefactor, but rather a sister in Christ. We Christians are called to give freely to the poor from our excess, which most of us have in abundance. In return, God blesses us for our generosity, and he alone judges our stewardship.

Read more:
Yeah, he’d been homeless … but he was my friend

We can’t take a communistic position on charity — dictating how the portion we give will be used, thus removing the freedom from both the gift and the reception. True charity requires a detachment from the gift. If we begrudgingly hand over a $1 bill while mumbling under our breath how this drunkard will squander it, we have undone all that God has wished to pour out upon us. Love purifies both of us — filling us with more of Christ and less of ourselves.

Recently, I came upon a man begging at an intersection. I happened to have a $20 bill in my console, which I’d found on the side of the road. I smiled and called to him, and the man slowly hobbled over. As I handed the bill out my window, he stared unbelieving. Hesitating to take it, his eyes filled with tears. Finally, tucking his cardboard sign under his arm, he took the money and stood weeping. I was filled with compassion for this man, and as he said “God bless you, you don’t know what it means to me,” I realized that I really didn’t. Perhaps I will never know what it meant to him — not in this lifetime anyway.

As I drove away, I smiled. I was free from the terrible burden of guilt that had bullied me into not acknowledging my poor brother or sister. It’s true that I don’t know what the beggar will do with my charity. I don’t know if he will use it for good or ill — but that doesn’t matter, because that’s not what God is asking of me.

“Among all (works of mercy), giving alms to the poor is one of the chief witnesses to fraternal charity: it is also a work of justice pleasing to God.” CCC 2447

Read more:
How a hungry boy taught me the ugly truth about myself

Read more:
I left my first son in Acapulco