Why I ended up with too many children 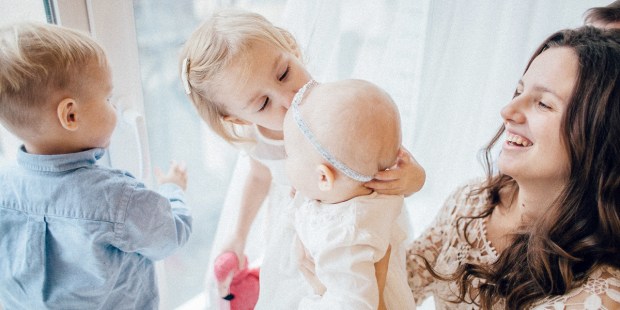 No matter how many children you have, the number is always just right.

I have too many children. I’m ready to admit that, especially after last night when I poked my head through the bedroom door to say goodnight – all five of them insist on sleeping in the same room – and noticed that the three-year old had climbed into bed with her big sister and the boys had collapsed into a tangled heap next to each other, arms and legs splayed everywhere. If I can’t even afford enough beds for these kids, what kind of father am I?

Earlier that day, I encountered the same problem with our dining room chairs. We only have six chairs in our set, which leaves us one short, so we’ve added two mismatched, ancient chairs that I found in a thrift shop 20 years ago. The chairs possess an archaeological dig-type quality, by which I mean, they belong in a dumpster because their usefulness is long past. Each one has decayed to the point that a metal spring juts out of the middle of the seat. Last night at dinner, I got stuck sitting in that seat. A wave of giggles formed like a wave around the table as my very own flesh and blood offspring laughed at their father. After all I’ve done for them.

Here’s the thing, though. I absolutely love having too many children. In fact, we’re about to have a sixth. I love how they all insist on sleeping together (even though there really are plenty of beds to go around), and how every night is a slumber party. It warms my heart to see the older ones caring for and love the younger ones. I love the mad scramble at dinner to not get stuck on the metal-spring chair. Too many children? For our family, at least, I wouldn’t even know how to take the idea of “too many” seriously. We have exactly as many children as we have hoped for, and each one is precious.

Family size is an intimate decision between a couple that is subject to a lot of factors: Age, physical health, income, time management, lifestyle, and how big a van you’re willing to drive. Some couples who want lots of kids don’t get them and some who have an abundance of fertility may have originally hoped for just a few. Life is like that, and I would never question the family size of a smaller brood, so it amuses me when I’m given grief for the size of mine.

It isn’t unusual, for instance, for a stranger in the supermarket checkout line to observe our children happily helping move the groceries onto the conveyor belt and exclaim that we really have a handful of young terrors to deal with. This, by the way, is said while our children are listening. I know it’s meant to be good-natured small talk, but in fact it’s quite offensive. In the past, I’ve simply stared pointedly at my well-behaved children as they industriously unload the shopping cart and responded that my children are wonderful. Now that our sixth is on the way, I suppose I can also point out that we, in fact, have more than a handful.

I wonder if the notion that it’s okay to imply that couples with more than a few children have “too many” comes from our popular media. For instance, articles such as this one are fairly common, “Science proves kids are bad for earth. Morality suggests we stop having them.” I don’t want to get into a debate about how many humans is the right number to be alive on this earth, but I’m informed enough to know that we’re actually in a low-population cycle of fertility. Further, climate change concerns and the number of children I have aren’t as connected as some might think.

If anything, we don’t have enough babies around. So I say, if you want to have a lot of children, go ahead. If one, two, or even zero, is the number for you because of your own reasons, I say that’s good, too. I’ll simply say that, for me, having children has greatly improved my life. They’ve helped me refine what I consider truly important; they hug me when I leave for work in the morning; they fill the house to bursting with joy and noise; and they’ve given me an excuse to play t-ball again. Even the difficult parts of raising them end up being worth it because through them I’m slowly learning patience, self-sacrifice, and selflessness. My children have made me a better person.

So, wherever you are in your parenting journey, I hope you’ll be encouraged. If you’re thinking about having your first child and are anxious about adding a new life to this world and how you’ll handle it, don’t worry, you’ll do great. Life will change, but that little child will be a gift in ways you can’t even imagine.

Or, if you’re thinking about adding a third, fourth, fifth, or dare I say sixth, child or more, then don’t let anyone guilt or shame you out of it. You aren’t wrong for wanting to grow your family, because no matter how many children you have, there is no such thing as “too many.” The number is always just right.