Francis writes preface of Benedict’s works: A compass to understand our present day 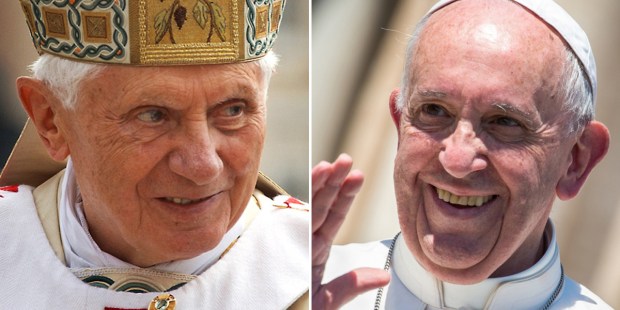 Another volume of selected texts from Benedict XVI’s collected works is set to be released in Rome this month, and Pope Francis has written the preface.

“Liberating freedom. Faith and politics in the third millennium” is the title of the work, and the current pope describes it as a sort of compass to “understand our present and find a solid orientation for the future.”

Here is the full text of Pope Francis’ preface:

The relationship between faith and politics is one of the great themes that has always been the focus of Joseph Ratzinger/Benedict XVI’s attention and runs through his entire intellectual and human journey: his direct experience of Nazi totalitarianism leads him since his early academic years, to reflect on the limits of obedience to the State in favor of the freedom of obedience to God: “The State – reads one of the texts – is not the totality of human existence and does not embrace all human hope. Humankind and their hope go beyond the reality of the State and beyond the sphere of political action. This applies not only to a state called Babylon, but to every kind of state. The State is not the totality. This lightens the burden on politicians and paves the way for rational policy. The Roman State was false and anti-Christian precisely because it wanted to be the totum of human possibilities and hopes. Thus demanding what it cannot; thus forging and impoverishing humankind. With his totalitarian lie it becomes demonic and tyrannical.

Later, also on this basis, alongside St. John Paul II, he elaborated and proposed a Christian vision of human rights capable of questioning on a theoretical and practical level the totalitarian claim of the Marxist State and the atheist ideology on which it was based.

Because the authentic contrast between Marxism and Christianity for Ratzinger is certainly not given by the preferential attention of the Christian for the poor: “We must learn – once again, not only at the theoretical level, but in the way we think and act – that alongside the real presence of Jesus in the Church and in the sacrament, there exists that other real presence of Jesus in the little ones, in the trampled of this world, in the last, in whom he wants us to found Him” already in the ‘seventies, Ratzinger writes with a theological depth, which is at the same time immediately accessible, proper to the authentic pastor. And that contrast is not even given, as he emphasized in the mid-eighties, by the lack of a sense of equity and solidarity in the Magisterium of the Church; and, consequently, “in denouncing the scandal of the obvious inequalities between rich and poor – whether it be inequality between rich and poor countries or inequality between social classes within the same national territory that is no longer tolerated”.

The profound contrast, Ratzinger notes, is given instead – and even before the Marxist claim to place heaven on earth, man’s redemption on earth – by the abysmal difference that exists as to how redemption should happen: “Redemption occurs through liberation from all dependence, or is the only way to liberation, the complete dependence on love, which would then also be true freedom?».

And so, with a leap of thirty years, he accompanies us to the understanding of our present, as a testimony of the unchanged freshness and vitality of his thought. Today, in fact, more than ever, there is the same temptation to refuse any dependence on love that is not a person’s love for their ego, for “the I and its desires”; and, consequently, the danger of the “colonization” of consciences by an ideology that denies the basic certainty that humankind exists as male and female to whom the task of the transmission of life is assigned; that ideology that goes to the extent of planning and rationally producing human beings and that – perhaps for some purpose considered “good” – manages to consider logical and legitimate the elimination of what is no longer considered created, donated, conceived and generated but made by ourselves.

These apparent human “rights” that are all oriented towards the self-destruction of humankind – Joseph Ratzinger shows us with strength and effectiveness – have a single common denominator that consists in a single, great denial: the denial of dependence on love, the denial that man and women are creature of God, lovingly made by Him in His image and to which they yearn as the deer longs for fountains of water (Ps 41). When we deny this dependence between creature and creator, this relationship of love, we renounce the true greatness of human being, the bulwark of their freedom and dignity.

Thus the defense of human being against the ideological reductions of power passes today once again by fixing man and woman’s obedience to God as the limit of their obedience to the State. To take up this challenge, in the real change of epoch in which we live today, is to defend the family. On the other hand, St. John Paul II had already understood the decisive significance of the matter: rightly called the “Pope of the family”, he not by chance stressed that “the future of humanity passes through the family” (Familiaris Consortio, 86). And along these lines I also reiterated that “the good of the family is decisive for the future of the world and of the Church” (Amoris laetitia, 31).

So I am particularly pleased to introduce this second volume of selected texts written by Joseph Ratzinger on “faith and politics”. Together with his powerful Opera omnia, they can help all of us not only to understand our present and find a solid orientation for the future, but also be a real source of inspiration for political action that, by placing the family, solidarity and equity at the centre of its attention and planning, truly looks to the future with foresight

Joseph Ratzinger’s “Liberating freedom. Faith and politics in the third millennium” published by Cantagalli, will be launched at the Italian Senate, Sala Zuccari, in Via della Dogana Vecchia in Rome, on Friday 11 May at 6pm.