This church is said to be consecrated by St. Michael the Archangel 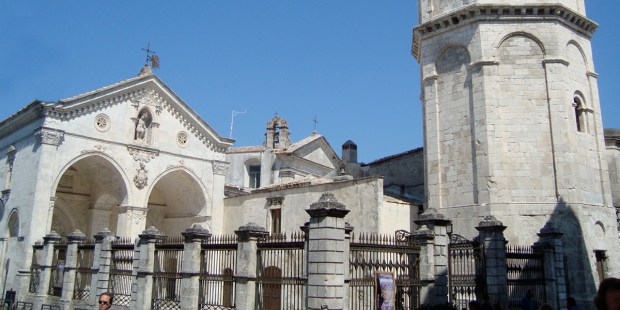 The “Celestial Basilica” is held as the only church in the world not consecrated by human hands.

The Sanctuary of Monte Sant’Angelo sul Gargano, more commonly referred to as “Monte Gargano,” is located atop a mountain on a peninsula of land surrounded by the Adriatic sea. It is the source of many legendary stories, including one that explains why it is labeled the “Celestial Basilica.”

In 493 a local bishop in Italy was urged by an angelic messenger to establish a church at a nearby grotto. When the bishop arrived, he was about to say the necessary prayers to consecrate the area as a place to offer the sacrifice of the Mass.

However, he soon discovered that his services were not needed.

A popular retelling of the story reveals many miraculous events that happened on that day.

[T]he bishop of Siponto, together with seven other Apulian bishops went in procession with the people and clergy of Siponto to the holy place. During the procession a wonderful thing happened: some eagles sheltered the bishops from the rays of the sun with their outspread wings. When they arrived at the grotto they found that a primitive altar had already been erected, covered with a vermilion altar cloth and surmounted by a Cross; moreover, according to the legend, they found the footprint of Saint Michael in the rock. With immense joy the holy bishop offered the first divine Sacrifice … The grotto itself is the only place of worship not consecrated by human hand and over the centuries has received the title of “Celestial Basilica.”

This “dedication” is celebrated annually on May 8, along with several other encounters with St. Michael the Archangel that took place at this sacred site.

Monte Gargano became a center point of devotion to St. Michael throughout the Middle Ages, attracting pilgrims from as far as the British Isles. It is believed that many other churches dedicated to St. Michael the Archangel received inspiration from this specific shrine.