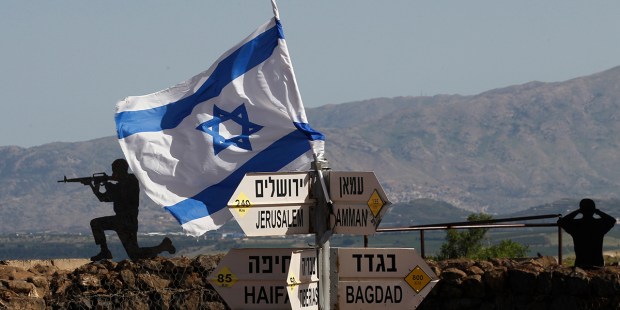 The secretary-general of the United Nations, Antonio Gutteres, has called for an immediate halt to “all hostile acts” to avoid “a new conflagration” in the Middle East after Israeli forces bombed Iranian targets inside Syria.

Israel said the strikes it carried out against Iranian assets inside Syria on Thursday were retaliation for an Iranian rocket barrage on its positions in the Golan Heights, the disputed territory between Syria and Israel. That barrage came soon after President Donald J. Trump’s announcement Tuesday that he is ending the United States’ participation in the Iran nuclear deal. Israeli jets struck back at Iranian forces in Syria, bombing dozens of targets, according to the Washington Post.

But this is only a flare-up of long-simmering tensions. Iran’s leaders have called for Israel’s elimination ever since the Iranian revolution in 1979, when religious hardliners came to power. Iran rejects Israel’s right to exist, considering it an illegitimate occupier of Muslim land, the BBC explained.

Since the beginning of the Syrian civil war, Iran has played a bigger and bigger role backing the government of Bashar al-Assad by sending thousands of fighters and military advisers. Iran, along with Russia, helped turn the tide in the war and give Assad the upper hand.

But Iran’s assistance to Damascus is considered to be just one part of its playbook to build a “Shia Crescent” across the Middle East, with the western tip of the crescent pointing towards Israel. Its backing of radical groups such as Hezbollah, the Palestinian militant organization Hamas, and the Houthi Rebels is another. Tehran has also intensified its involvement in Iraq and Lebanon. Israel worries that Iran is trying to send weapons to fighters in Lebanon. Over recent months, the Israelis say, a variety of Iranian installations have been established in Syria: weapons stores, barracks, air defences and so on, the BBC notes:

The immediate tensions stem from an Israeli air strike on what they claimed was an Iranian drone facility at the so-called T-4 air base, near Palmyra, on 9 April, which reportedly killed several Iranian military advisers.

Iran vowed to respond and since then there have been sporadic incidents that appear to be Israeli efforts to thwart just such a response.

There was an Israel Defense Forces (IDF) air strike on an underground missile depot where the explosion was so large it registered on earthquake-monitoring systems. And just a few days ago, Israel claimed it struck at missiles that were being readied to be launched.

Then this week, the Iranians fired about 20 rockets at Israeli military positions on the Golan Heights. Israel says it destroyed the launcher from which these were fired and went even further, striking most, if not all, of the Iranian installations it knows about in Syria, in an attempt to set back the development of Iran’s military infrastructure in the country.

Guterres noted “with relief, today’s partial normalization of the situation,” and urged “an immediate halt to all hostile acts and any provocative actions to avoid a new conflagration in the region already embroiled in terrible conflicts with immense suffering of civilians,” added the statement.

The Golan was captured by Israel in the 1967 Middle East war, and in 1974, a UN observer force was set up to monitor the ceasefire reached that year by Israel and Syria.

Dujarric noted that the UN Disengagement Observer Force (UNDOF) has maintained contact with forces of both sides during the latest hostilities and urged them to exercise “maximum restraint” and abide by their obligations under the 1974 agreement.