Are these the 17 most beautiful hymns to Mary? 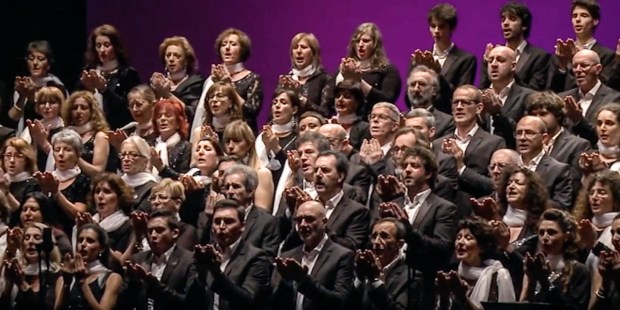 We bet there are a few here you’ve never heard.

I asked that question on Facebook, and heard from friends far and wide. I loved many of their suggestions — some of which introduced me to hymns I had never heard before. Others were hymns that may have once been favorites, but which I have now sung maybe 35 or 50 times too many.

I pared the list down to my personal 17 favorites. Please note your own favorites in the comments!

The song itself may not be my favorite, but anyone who has heard Fulton Sheen mention this prayer —reading it dramatic fashion to end a talk — will appreciate “Lovely Lady Dressed in Blue” set to music.

16: Bring Flowers of the Rarest

I’m not always in the mood for Irish tenors, but when I am, I want to hear them sing the 19th-century hymn “Bring Flowers of the Rarest” written by Mary E. Walsh that celebrates “the Queen of the May.”

The beautiful hymn “O Mary of Graces” is translated from a Gaelic original.

This Anglican boys choir from London includes a number of Marian hymns in its repertoire. “You Were There” is a contemporary hymn sung to God and to his mother, the queen of heaven.

Marian pop songs range from the absurd (Elvis Presley’s wonderfully cheesy “Miracle of the Rosary”) to the sublime (Patty Griffin’s beautiful, introspective “Mary”) but here is one everyone can love, “Holy Mother,” which was a regular on the set list of Eric Clapton in his later years.

12: Behold, the Virgin Shall Be With Child

I love this Marian hymn that uses a text from Isaiah. “Behold, the Virgin Shall Be With Child” was written by two young musicians I met a long time ago when they were not yet able to handle instruments so well, Brendon and Natalie Mezzetti.

My wife and I were surprised one day at one of Atchison’s smaller churches (our small town has four Catholic churches) to hear the beautiful “Dear Lady of Fatima” by American Gladys Gollahon sung as a recessional hymn. We asked the singer, one of our confirmation students, how it ended up in the rotation and she said a couple of older parishioners requested it, remembering it from their youth.

I love when we get to sing “Sing of Mary (Pure and Lowly),” an early 20th-century hymn by Canadian Anglican Roland F. Palmer. I love that it is often attributed to “anonymous,” which makes its composer seem pure and lowly himself.

How could we not include the most popular Ave Maria? We hear it every Christmas from Harry Connick Jr., but everybody has their favorite. You can’t go wrong with Andrea Bocelli:

“Hail Holy Queen Enthroned Above” is a lot of fun to sing — especially with the organ blaring and with a church full of singers. But no one had more fun with it that the makers of Sister Act.

The Salve Regina is an irresistible old Latin Compline hymn that I know by heart though I never tried to memorize it. (“Gementes et flentes in hac lacrimarum valle …”). It’s the Latin inspiration for “Hail Holy Queen Enthroned Above.”

Here is another great “Ave Maria,” written in 1961 for a firemen’s choir, capable of bringing you to tears through the music alone.

5. The Akathist to the Theotokos

This 7th-century “Akathist to the Theotokos,” sometimes known by its “Rejoice Unwedded Bride” section, is a beautiful Eastern explanation of the greatness of the Blessed Mother.

4: Lo How a Rose E’er Blooming

When I asked for Marian hymns on Facebook, “Lo How a Rose E’er Blooming” was the first one mentioned. The original was a 16th-century German song, “Es ist ein Ros entsprungen.” Here is an English version by pop singer Sting.

Another one that Sting performs is “Gabriel’s Message” which is reportedly from a Basque folk carol, originally based on Angelus Ad Virginem, a 13th- or 14th-century Latin carol. Here is a version from one of my family’s favorite Christmas CDs, by the Christian group Jars of Clay.

O Sanctissima is an 18th-century song sometimes called “The Sicilian Mariners Hymn.” Of course, traditional versions are the best, but you’ve got to love hearing Bing Crosby sing it.

My favorite Marian hymn is the Ave Maria by Bach/Gounod. Charles Gounod set the theme over a Bach prelude (Prelude No. 1 in C major, BWV 846, from Book I of J.S. Bach’s The Well-Tempered Clavier). I like nearly every one of the many versions of it, but Bobby McFarrin’s is the most fun, and he describes how the piece was written, too — though he leaves out the detail that Gounod improvised the melody but his father-in-law was there to write it down.