Why we keep our “frenemies” close 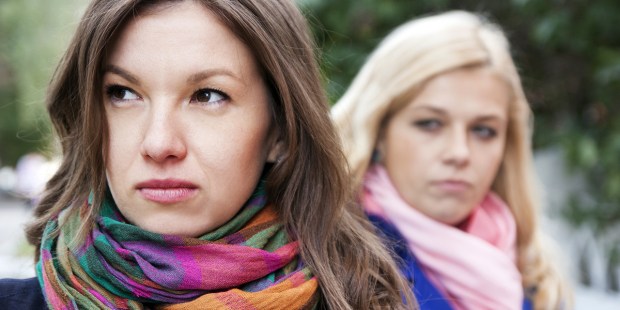 When my daughter Sienna was a toddler, we used to meet my friend Julie from college for coffee once a week. Julie had a daughter a few months younger than Sienna, and they always begged us to get together so the girls could play together.

But when we got together, they didn’t exactly play. In fact, they usually went into all-out toddler warfare, fighting over everything from toys to cups to stray sticks on the ground. Inevitably one of them would lose it and the playdate would end with hitting, kicking, and on special occasions, biting.

We couldn’t figure out why they wanted to “play” and then spent the whole time fighting, so we jokingly dubbed them “frenemies.” Interestingly enough, the “frenemies” phenomenon isn’t just limited to bickering toddlers and teenage mean girls, though — it’s widespread enough to get the attention of evolutionary psychologists, some of whom recently shared their research with Psychology Today:

Under ancestral conditions, cutting someone fully out of one’s life would have had very large and negative consequences, largely because human group sizes were very small (see Dunbar, 1992; Geher, 2014 (link is external). This may account for what happens when someone in our social worlds slights and/or betrays us. What our research found is that in such a situation, people get mad at the insulter and even say that they would not want to forgive that person. But they seem hesitant to say that they are no longer “friends” with that person. Cutting someone off as a “friend” may simply be too risky in a highly social species like ours. Instead, it seems that we tend to relegate such a traitor in our social world to the category of “frenemy” — seeing him or her as an enemy, but publicly maintaining bonds of friendship with that person. Often quite begrudgingly!

It’s fascinating to think about how the bonds of social structure evolved, and the way that evolution still impacts our relationships today. While labeling someone an “enemy” today might not run you the risk of being cut off from a social group that provides you sustenance and physical protection, it could still pose a very real risk to your means of making a living in a work environment. Or in a social setting, you could risk losing social status within your network, or even losing your social network altogether.

It’s clearly something that evolution has programmed into us, otherwise toddlers wouldn’t play frenemies as often as they play friends. They’re learning social dynamics by testing limits, just like teenagers do. And one of those dynamics is learning to navigate the realm of friendship and distinguish between friend and enemy, or recognize a person who walks the fine line of frenemy.

That being said, one good way to teach our kids to navigate social dynamics is to encourage them to confront their friends, frenemies, and enemies when something hurtful has been said or done to them. Being open and honest and allowing the other person a chance to apologize is an exercise in true friendship — as is accepting an apology and extending forgiveness. It might be the hardest part of friendship, but it’s what separates true friends from frenemies.

Read more:
Jesus wants you to love everyone, and still have a best friend