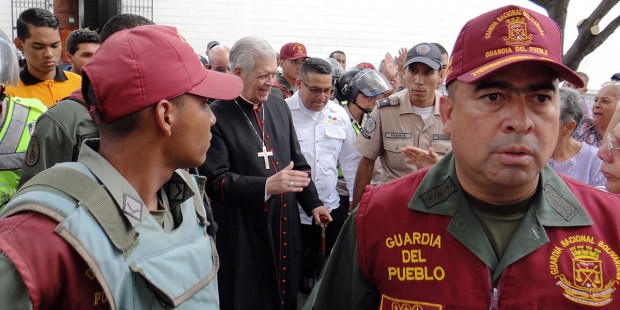 Caracas archbishop calls for delay in presidential election, which is set for Sunday

The litany of Venezuela’s ills, as reported in the Washington Post, is long and mournful:

Most disturbing of all, however, is the ongoing hunger and medical crisis: “Saddled with a soaring inflation rate that has put food out of reach, Venezuelans, weakened and thin, are getting extraordinarily sick,” says the report. “Doctors say cases of diseases once thought largely eradicated — malaria, diphtheria, measles and tuberculosis — are not only resurfacing but surging.”

And yet, Venezuela’s president, Nicolás Maduro, is widely expected to win another term in elections this Sunday. The Catholic bishops of Venezuela declared that the elections lack legitimacy, because, they said in a statement, “as conceived, and without the necessary guarantees common to every free, trustworthy and transparent electoral process, and with the innumerable disqualifications of potential candidates, such an election, far from bringing about a solution to the crisis the country is facing, may even aggravate this crisis and lead to a humanitarian catastrophe without precedent.”

Cardinal Jorge Urosa, archbishop of Caracas, compared the government’s move of the election date, which was originally planned for October or December, to a game of football, “where one team moves up the date of the match by 10 days from the date agreed on, without giving the other team the chance to gather its best players.”

Cardinal Urosa, speaking with the international Catholic aid agency Aid to the Church in Need, instead that elections be postponed, “because in reality they are neither legal nor democratic.” He also commented on the worsening security crisis.

“It seems as though evil is getting the upper hand, and that it doesn’t matter if children die or if someone surrenders and still gets murdered,” the cardinal said.  “The shortage of medicines and medical supplies is extremely serious, including medical care in hospitals; the shortage of basic foodstuffs and the high cost of food, the problem of transport, and the lack of ready cash.

He said that a kilogram [2.2 pounds] of meat or of powdered milk costs the equivalent of a monthly minimum wage.

When asked what can be done, he admitted that the situation is difficult to change. “How can there be change when the government has occupied every position on the public institutions? There is no one to turn to. We have the National Assembly, but it is practically paralyzed, just as political parties have been effectively side-lined.”