Common faith and prayer network the world: the precursor of the digital revolution 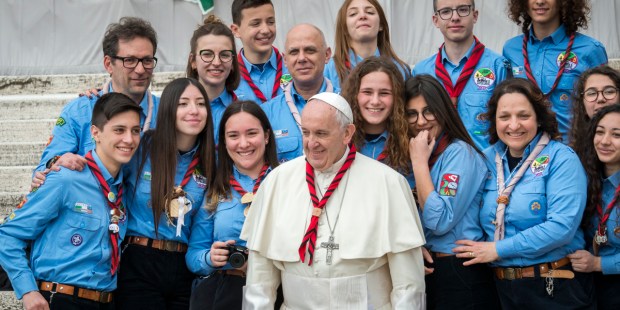 And holiness is the true fountain of youth, says pope for prayer vigil

“Holiness keeps us eternally young,” said Pope Francis during a video message for a prayer vigil held this week in Italy and other countries, according to information from the Holy See.

While the main prayer vigil was held in Italy, video links were established with other gatherings in Panama, Russia, Ireland, and Taiwan. “The one faith and common prayer unite believers,” the pope said. “We are the precursors of the digital revolution!”

According to Peter’s Successor, it is “beautiful” that young people pray the Rosary, because the Blessed Virgin’s witness is “more relevant than ever.” While still an adolescent, she accepted the Lord’s call; three decades later, she followed her son “with the enthusiasm of the young.”

Mary thus illustrates that “holiness keeps us eternally young,” and is the true “elixir of youth,” the pope said. Following the Virgin Mary’s example, he said, “do not be afraid of being saints.”

Read more:
Pope: Yes, you should pray the rosary every day!

“Prophecy of peace and reconciliation”

This unity in prayer joining five countries around the world is a “prophecy of peace and of reconciliation,” said the Bishop of Rome. Young people, he said, can teach adults the path of dialogue by showing the “enthusiasm, determination, and love” of which they are capable. “I will never tire of repeating: don’t raise up walls, build bridges!” the Pontiff insisted.

For him, the world and the church are in need of young people. They must neither allow themselves to be silenced, nor be afraid to make mistakes. When they do make mistakes, the head of the Catholic Church said, they must simply move forward, learning from their errors.

The goal of these prayer vigils is to prepare the Synod of Bishops this coming October on young people, faith, and vocational discernment.