Paul VI and Oscar Romero to be canonized October 14 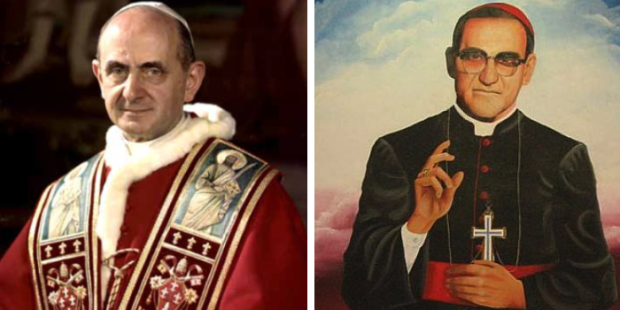 Pope Francis has set the date for the canonization of both Pope Paul VI and Archbishop Oscar Romero for October 14, during the synod on young people, it was announced today.

Pope Paul VI was the pope who closed the Second Vatican Council in 1965.

He died at the papal residence of Castel Gandolfo on August 6, 1978, after being pope for 15 years.

At a General Audience on March 16, 1966, he said that “holiness is within everyone’s reach” and that we only need two elements in order to become saints: “the grace of God and good will.”

Read more:
Read what Paul VI says is the one mystery to understand the whole of Christianity

Both of the miracles leading to the pope’s canonization involved unborn children, particularly significant as this saintly pope is perhaps best known for his encyclical on artificial birth control, Humane Vitae, which was released 50 years ago this year.

The first miracle occurred in 2014, when an unborn child was inexplicably healed in her mother’s womb. On a visit to Brescia, Paul VI’s birthplace, she prayed to him for her child’s recovery which, contrary to all medical predictions, was complete, and she gave birth to a healthy baby girl.

The second miracle also involved the healing of a baby during a complicated pregnancy.

A saint of the poor

Because of his advocacy for the poor, he had made enemies in the Salvadoran government in the midst of the conflict between the military government and guerilla groups that claimed tens of thousands of civilian lives.

The pope and the archbishop will be canonized in St. Peter’s Square along with four  other saints of charity.

Read more:
Oscar Romero on the loveliness of suffering