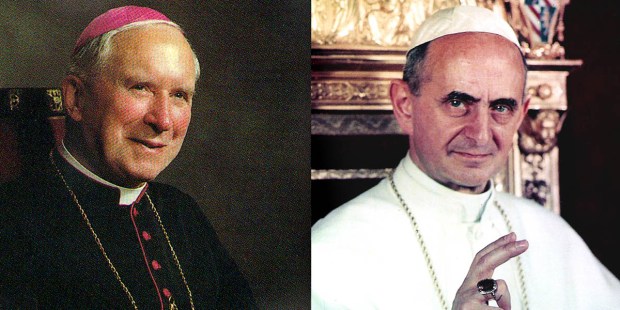 The two men agreed that there had been abuses after Vatican II, but the pope felt the need to begin fasting after their meeting.

The unpublished account of a meeting between Pope Paul VI and Archbishop Marcel Lefebvre, founder of the Society of St. Pius X (FSSPX), has just been released in Italy, Vatican Insider reported on May 16, 2018. The two men agreed that there had been abuses after Vatican II, but the pope reproached Archbishop Lefebvre for his lack of obedience.

Reported in the book The barca di Paolo (Paul’s Barque, not yet available in English), this half-hour meeting took place on September 11, 1976, in Castel Gandolfo, north of Rome.

Six years prior, Archbishop Marcel Lefebvre had founded the Ecône seminary in Switzerland for the training of FSSPX priests. The local bishop had authorized the seminary, but his successor asked for it to be shut down. Rome supported the request three times, but Archbishop Lefebvre refused, which resulted in his suspension a divinis. Even so, in August 1976, the prelate celebrated a public Mass in Lille in front of 6,000 faithful, including many journalists who were witnesses.

Obedience to the pope

For Paul VI, the problem was above all a question of obedience to the Sovereign Pontiff.

“The position you have taken is that of an anti-pope. (…) You have judged the pope as unfaithful to the Faith, of which he is the supreme guarantor. (…) If it were so, I should resign and invite you to take my position to lead the Church,” the pope told the French archbishop, asking him if he realized “the scandal and the harm that [he] had caused to the Church.”

For his part, Archbishop Lefebvre acknowledged that his words and writings may have been “inappropriate,” but said he could not go against his conscience. Mainly, he claimed, because some conciliar documents do not agree with the tradition of the Church. What he wanted, he explained, was above all “to train priests according to the Faith and in the Faith.” In some other seminaries, he denounced, there are “unimaginable situations” taking place.

“Everything would be solved,” said the archbishop, if the pope would ask the bishops to allow chapels where the faithful could “pray as they did before the Council.” Peter’s Successor rejected the suggestion: “We are a community and we cannot allow the different parties to act as if they were autonomous.”

A “Church in crisis”

“The Church is in crisis,” said Archbishop Lefebvre. Paul VI agreed with this statement, and said it made him suffer deeply. And the pope recognized that there are very many “abuses.” He insisted, “We do not approve of these behaviors,” and stressed the need to fight them with “a lot of effort and tenacity.” He added, “We are the first to deplore the excesses.”

Despite these abuses, continued Paul VI, the good that the Council has brought is even greater. “There are signs of the times, thanks to the Council, of a strong spiritual recovery among young people, a rise in the sense of responsibility,” he noted. And he said Archbishop Lefebvre’s behavior was contributing to and aggravating the difficulties because of his “solemn disobedience, with his open challenge against the pope.”

Bishop John Magee, Paul VI’s second secretary, said the pope began a fast after this meeting with the French archbishop. “He said that he had to do penance himself, to offer to the Lord—in the name of the Church—just reparation for everything that was going on.”