The Catholic singer with more than 50 million views on YouTube 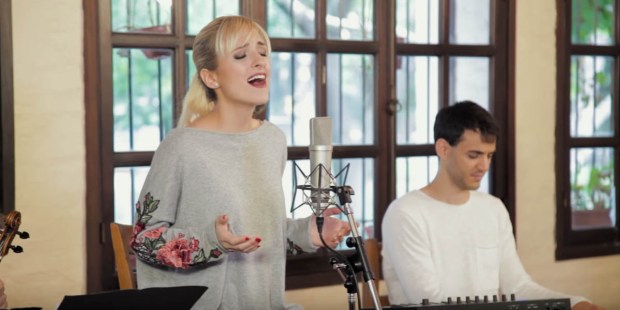 Athenas presents her new album and video ‘Todo es tuyo (Everything is Yours).’

At the age of 26, Athenas has released two albums—Cristo Reina (“Christ Reigns,” 2014) and Me basta tu gracia (“Your grace is enough for me,” 2016), and has given concerts in 16 countries, visiting more than 90 cities in Latin America and the United States. In 2018, after releasing her third album, Todo es tuyo (“Everything Is Yours”), she will go on a world tour, including Europe for the first time.

There, she will give prayer-focused concerts in more than 10 cities in Spain and Italy. In the years since she started her YouTube channel, she has accumulated a total of more than 50 million views and has acquired nearly 200,000 followers across all her social networks.

“We believe that there is no more powerful factor for transforming a person’s life than having an encounter with Jesus. Today, more than ever, music is a great tool for making this happen, especially for younger generations. This is why we want to do it with the greatest excellence and quality possible—because we are convinced that God deserves our best.”

Todo es tuyo was recorded during the month of April at the famous Romaphonic studios in the city of Buenos Aires, Argentina, where some of the most famous artists from Argentina and the Spanish-speaking world at large record their music (Fito Páez, Alex Ubago, Charly García, Andrés Calamaro, etc.). It is the first album that Athenas has made with her husband, Tobías Buteler. This album became a reality thanks to the collaboration of more than 500 people who contributed through an internet-based crowdfunding campaign. During the campaign, people were able to make donations in exchange for various rewards, such as a digital download of the new CD, among other options. The music on the album was produced by Francesco Mazza, and composed by Tobías Buteler and the singer herself. The result is 12 songs written to help us connect with God.

Each composition was designed for a specific context within the Catholic Church (Eucharistic adoration, retreats, missions, concerts, etc.) and to be the soundtrack of people’s daily lives, using fresh, modern language.

“Qué bien se está aquí” (“How good it is to be here”) is the first track from her upcoming, long-awaited LP. It is also the first of 10 videos that will be published week by week on the “Athenas Música” YouTube channel. Audiovisual production of the video was by Arimatea Films, directed by Charly Ramacciotti, together with a large team.

After releasing this album, Athenas will begin an important tour throughout all of Latin America, the USA, and—for the first time—Spain and Italy, starting this May in Costa Rica.