Whether it is the Holy Land, Fatima, or Santiago, a pilgrimage is an opportunity to enrich one's spirit

The holy pilgrimage has been a Christian tradition since the first recorded spiritual journey, in which a bishop named Mileto from Sardis in Asia Minor traveled to the Holy Land in around 160 to visit “the place where [things described in the Bible] were preached and done.” Whereas current circumstances are keeping us all from going on a pilgrimage, it is always good to plan ahead and prepare for the future.

In the 4th century, pilgrimages following the footsteps of Jesus and the apostles became popular after Constantine’s mother, St. Helena, visited Jerusalem, discovered what is thought to have been the True Cross, and built churches over holy sites related to Jesus’ life. To walk the same path as Jesus and his followers, and to see with one’s own eyes the places mentioned in Scripture, was more than just travel, it was meant to hasten an interior journey as well.

Rome became a major destination for European pilgrims in the 7th century after the Muslim conquest of the Holy Land limited the number of Christians allowed to visit the holy sites there.

The Crusades themselves were considered a form of pilgrimage, and pilgrimages to the Holy land increased in the late Middle Ages, partly due to the guidance of the Franciscan friars who were entrusted with the guardianship of the holy sites.

Today, Christians continue to make pilgrimages to enrich their spiritual lives. Taken in the spirit of prayer, a pilgrimage can be as life-changing today as it was in the time of St. Jerome, who in the 4th century wrote, “We will have a clearer grasp of Scripture after we have gazed with our own eyes on the sites where the events of our salvation unfolded.”

Read more:
Here’s why a pilgrimage is an important aspect of the spiritual life

Here’s a glimpse of a few sacred places to complete any Catholic’s “bucket list,” where modern pilgrims can travel to walk the same path as Jesus and his followers, and visit the sites of the miracles and apparitions:

For the last 800 years, the Order of St. Francis has had guardianship over these holy sites, and is today working to ensure that Christians continue to exist in the birthplace of Christianity. By offering pilgrimages in the Holy Land, they can help fulfill that mission.

The busiest times in Holy Land are during the major Christian and Jewish feasts in spring and fall.

The shrine in Fatima, Portugal, marks the spot where Our Lady of the Rosary appeared to three shepherd children, Lucia dos Santos and her cousins, Francisco and Jacinta, between May and October of 1917. Pilgrims from all over the world gather for the torch-lit processions held every day, but especially on pilgrimage days in May and October.

Pilgrims travel to Fatima all year round, but the best-attended processions are held on the 13th of May and October.

The Way of St. James or El Camino de Santiago became a major pilgrimage destination during the Middle Ages. Tradition tells us that St. James’ remains were carried by boat from Jerusalem to northern Spain where he was buried. Medieval pilgrims traveled from their homes to what is now the city of Santiago de Compostela, receiving penance for the expiation of sins by undertaking the arduous journey.

Today, the pilgrimage has enjoyed a resurgence in popularity, among believers as well as non-believers in search of a retreat from modern life. Pilgrims’ hostels or albergues welcome travelers along the way and can be found along the routes in Spain, France and Portugal.

Read more:
You want to walk the Camino de Santiago? Here are 10 things you should know

July and August are the busiest months on the Camino. Pilgrims traveling during April, May, June and September enjoy warm weather without the crowds.

Ireland has a long tradition of holy pilgrimages, dating back to St. Patrick’s fast on what is now known as Croagh Patrick in 441. In the pasts few years, the Pilgrim Paths foundation has been restoring the ancient penitential paths, and has so far created five guided walks. After pilgrims get their “passports” stamped after completing each of the five routes, they receive an Irish Pilgrim Paths completion certificate from Ballintubber Abbey in County Mayo.

When to visit
This August 18-25 Pilgrim Paths is holding its second annual Irish Pilgrim Journey, offering local guides for the 5 pilgrim paths. Other pilgrimages can be found by tour groups in conjuction with this year’s World Meeting of Families in Dublin, which takes place between August 21 and 26.

European pilgrims headed to Rome along the Via Francigena to follow the paths of the martyred saints and early Christians. Emperor Constantine erected basilicas over the tombs of Peter and Paul, which attracted the faithful from all over Europe.

Read more:
The Via Francigena: The other great European pilgrimage

Today a modern pilgrim would similarly visit St. Peter’s Basilica, attend a papal audience with the successor to St. Peter, take a tour of the Catacombs, the Vatican museums, and the ancient churches of the Eternal City.

Winter is the best time to visit Rome if you want to avoid the crowds. Spring and fall, outside of Easter week, offer mild temperatures without the crowds of summer.

Millions of pilgrims flock to southwestern France each year to visit the Shrine of Our Lady of Lourdes. It is there that the Blessed Virgin Mary appeared 18 times in 1858 to a young peasant girl, St. Bernadette Soubirous. In one of her appearances she told St. Bernadette to drink from the grotto’s spring. Many of the sick and suffering claim to have been miraculously cured by the spring’s healing waters.

The quiet season at Lourdes is between October and March. During peak season, beginning at Easter, there are usually about 25,000 pilgrims a day visiting Lourdes.

Even before Pope John Paul II’s canonization, a spiritual journey to his homeland in Poland had become a popular pilgrimage among Catholics. An itinerary might include a visit to Karol Wojtyla’s childhood home in Wadowice, the shrine of the Black Madonna at Jasna Gora Monastery in Częstochowa, and the beautiful Tatra Mountains where John Paul II skied. Other must-visit sites: The Shrine of Divine Mercy and the martyred St. Maximilian Kolbe’s cell at Auschwitz.

As with most popular destinations in Europe, summer is the most crowded season. May to October is the best time to travel to Poland to avoid the cold weather.

For more images from these pilgrimages launch the slideshow. 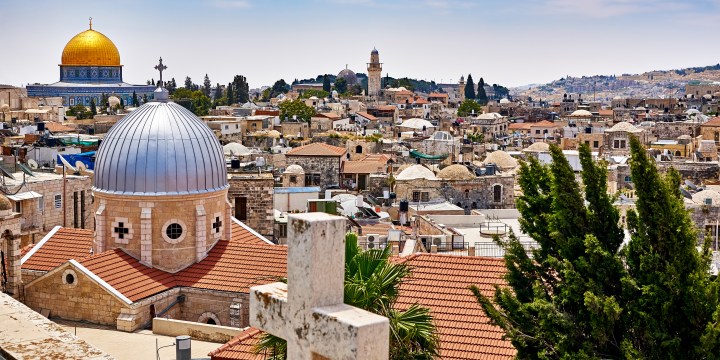